Gross and delicious at the same time! (Not something you can say very often) Basically a gigantic cake pop. Kids (and adults) have a blast eating this while mumbling, "braaaaaains!" Have fun with it!

In a bowl, beat eggs on high speed about 4 minutes, or til thick. Gradually add sugar; beat at medium speed for 4 to 5 minutes or until light and fluffy.

In a saucepan, heat and stir milk and margarine until margarine melts; add to batter, beating until combined.

Pour into 2 greased 9 x9 x 2 inch baking pans. Bake at 350 degrees F. for 20 to 25 minutes, or until a toothpick comes out clean. Cool COMPLETELY on a wire rack

Place the butter into a large bowl and using an electric mixer beat for 5 minutes, until light and creamy. Adding a little at a time, add the icing sugar. Once all the sugar has been incorporated, add the vanilla and salt and beat together for a further 5-10 minutes, until the frosting is light and fluffy.

To finish add the cream cheese and beat together until fully incorporated (don’t beat too much at this stage as the frosting will become too thin). Use a skewer to add a very small amount of red food colouring and mix together to turn the frosting a pale pink.

Use your hands to crumble the cake, rubbing with your fingers until it resembles breadcrumbs. Add half the frosting, a few spoonfuls at a time, mixing in more until when squeezed together it holds its shape. Line a clean bowl with cling film and tip in the brain mixture compacting down with the back of your hand. Turn out onto a serving plate or cake stand, remove the bowl and peel off the cling film.

To decorate place the remaining frosting into a piping bag fitted with a large plain round nozzle (or just a ziplock with the corner cut off) and pipe in a random pattern all over the cake, to resemble a brain. Place the cake into the fridge for about an hour or until the buttercream is firm to the touch.

Put the jam into a small bowl and add couple tablespoons of cold water, mixing together to make a thin raspberry glaze. Use a pastry brush gently spread the jam over the entire cake, using a light touch as to not disturb the buttercream. Allow the cake come back to room temperature again before serving. 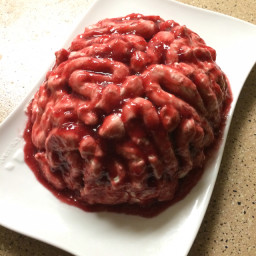 TrueSpectre
For some reason, seedless raspberry jam doesn't show up on the ingredients list (and my edits don't seem to be working). You need that for the end - the gross factor isn't nearly as good without it. I posted this recipe!
5y
Reply
Reply