This casserole needs to be prepared the day ahead and then baked day of. It makes a good breakfast casserole for a large group. It's actually very good. Don't omit the mushroom soup, it adds to the flavor. Do use a good cheese with strong flavor, medium or sharp cheddar or other flavorful cheese. This is my grandmother's recipe.

Remove crust from loaf of bread. Spread lightly with mustard, Lay half the slices in the bottom of a large casserole (9x13),

Cover with other half loaf. Combine eggs and milk and pour

Bake 1 hour at 350 degrees. Remove from oven. Mix one can mushroom soup with 1/4 cup water and pour over baked casserole. Sprinkle with additional grated cheese if you wish. Return to oven for 30 minutes at 300 degrees.

Variations: I substituted Kings Hawaiian Rolls instead of white

bread. I sliced them in quarters so that it would mimic slices of

white bread. I also used honey mustard instead of regular yellow mustard. If you use sliced deli ham, then just chop it up into small pieces, this will make it easier to serve. Chopped bacon would also be a good substitute. I also added just a little bit of chopped onion (1/4 of an onion). 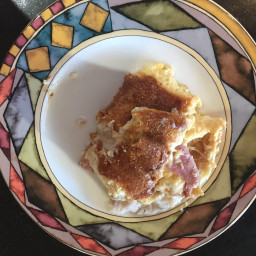