Try this Harvest Apple Challah recipe, or contribute your own.

To make the dough: Mix together all of the dough ingredients. Knead the dough in your mixer at medium-low speed for 6 minutes, or by hand for 8 minutes. The dough should be soft and elastic. Place the dough in a greased bowl, cover, and let it rise for 2 hours, or until puffy; when you poke the dough with your finger, the dent will remain and not bounce back. If you've made the dough in a bread machine, allow it to rise in the machine for an extra hour after the dough cycle is completed.

Gently deflate the risen dough, transfer it to a lightly greased work surface, and flatten it into an 8" x 10" rectangle.

To make the filling: Toss the apple chunks with the cinnamon and sugar.

To assemble: Spread half the apple mixture in the center of the dough. Fold one short edge over the apples to cover them, patting the edges firmly to seal the apples inside.

Spread the remaining filling on top of the folded-over dough. Cover with the other side of the dough, again patting firmly and pinching the edges to seal.

Using a bench knife, cut the apple-filled dough in half lengthwise, then in eight strips across the short length. This will be messy, with some apples falling out.

Transfer the portions of dough and any stray apples to the prepared pan, forming a single layer across the bottom. Stack more dough on top of the first layer if needed to fit them all in.

Cover with greased plastic wrap or the reusable wrap of your choice, and let rise for about 1 hour, until puffy looking. Toward the end of the rise time, preheat your oven to 325°F with a rack in the lower third.

When the dough has risen, uncover it and brush with the beaten egg. Sprinkle with coarse sugar, if desired. Bake the challah for 55 to 65 minutes, until it's a deep golden brown. Some of the top pieces may caramelize; that’s OK.

Store covered at room temperature for up to three days; freeze for longer storage. 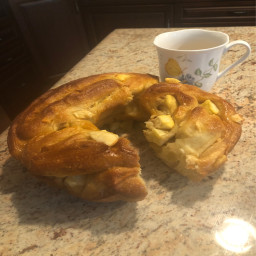 deeder5
Um, um good! I made this in a tube pan and it was very pretty.
3m
Reply
Reply