This made a good supper, although it didn't have cheese it wasn't missed. I will be making this one again.

Preheat the oven to 350F. Spray a 2 quart baking dish with nonstick spray.

To make the topping place the potatoes in a large pot with enough cold water to cover. Bring to a boil and cook until they are fork tender, 10 - 12 minutes. Drain the water then add the milk, butter, 1/2 tsp of the salt and 1/8 tsp of the pepper; mash and set aside.

Heat a large nonstick skillet over medium high heat. Add the beef, breaking it apart and cook until browned. Transfer to a bowl. Return the skillet to the heat. Add the onion, garlic, and oregano; cook, stirring, until the onion is lightly browned. Add the wine and tomatoe paste; stirring occasionally, until the mixture is slightly thickened. Add the peas and carrots; cook, stirring occasionally, until the vegetables thaw. Stir in the broth and cook until the mixture is slightly thickened. Stir in the beef and the remaining 1/2 tsp of salt and 1/8 tsp of pepper.

Transfer the filling to the baking dish. Spread the potatoe topping over the filling and bake until the filling is bubbly around the edges, about 20 minutes. Turn the oven to broil and broil the pie, 5 inches from the heat until the topping is lightly browned. Let stand 5 minutes before serving. 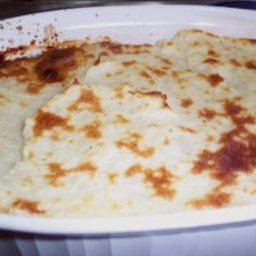 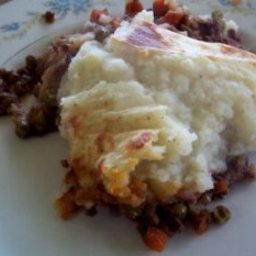 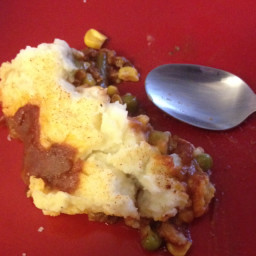 Personally, I prefer making it this way

kmcm7b
Subbed kidney beans and mushrooms for some of the beef. Super-good!
6y
Reply
Reply

nik_feliciani
Love the tomato paste that thickens it to a nice savory gravy. I added 1/2 tsp thyme and rosemary, brown gravy packet and omitted salt. I used only 1/2 tsp of oregano and onion. I cheated with instant mash shhhh ;)
6y
Reply
Reply

rachelns
I didnt' have any red wine, so I substituted balsamic vinegar. All my children loved it!
12y
Reply
Reply