Fried chicken is the ultimate comfort food. The only problem? All that grease and, well, frying. Our chefs found a way around this by coating chicken thighs with panko breadcrumbs and sour cream. The combination of this richly flavored cut of meat and a super-easy breading technique reproduces the impeccable crispiness of the Southern classic without the gallons of oil.

2 Add cucumbers, tomatoes, vinegar, 1 TBSP chives, and a large drizzle of olive oil to a medium bowl and toss to combine. Season with salt and pepper. Set aside to marinate.

4 Heat a drizzle of olive oil in a large pan over medium-high heat (use an ovenproof pan if you have one). Add chicken and cook until crumbs are browned, 3-4 minutes per side (TIP: Lower heat if crumbs brown too fast.) Transfer pan to oven and roast chicken until no longer pink in center, about 8 minutes (transfer chicken to a baking dish first if your pan isn’t ovenproof).

5 Meanwhile, melt 1 TBSP butter in another large pan over medium heat. Add corn and cook, tossing, until corn is a deep golden and butter is slightly browned and nutty-smelling. Season with salt and pepper.

6 Divide corn, salad, and chicken between plates. Squeeze a bit of lemon juice over chicken. Garnish with remaining chives and serve.

Nutrition Values/ per serving
Energy (kJ)2176 kJ
Calories520 kcal
Fat26 g
Saturated Fat9 g
Carbohydrate43 g
Sugar12 g
Dietary Fiber7 g
Protein40 g
Cholesterol170 mg
Sodium220 mg
Due to the different suppliers we purchase our products from, nutritional facts per meal can vary from the website to what is received in the delivered box, depending on your region. 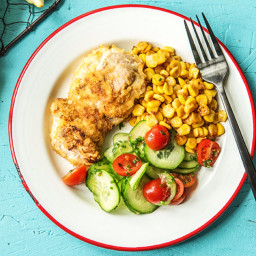