Here is how to make another version of an Egg McMuffin Breakfast Sandwich. This version has a toasted English muffin, topped with a fried egg, Canadian bacon, and a slice of deluxe American cheese. Easy and inexpensive!

Split an English muffin, and toast it in an electric toaster. Set aside. Spray the bottom of the open can with cooking oil spray (the end without the lip.) In a small skillet, melt 1/2 tablespoon margarine. Place 1 slice of Canadian bacon in the skillet to warm and brown up. When the skillet is hot enough to fry the egg, place the open can in the skillet, and break 1 egg into the can. You may need to press the can down initially, to keep the egg white from escaping. (Use a potholder, if the can is warm.) Once the egg starts cooking, you may release your hold on the can. Salt and pepper the egg to taste, and break the yolk, in order to mix the egg around a bit. Run a knife around the circular egg, and remove the can. Turn the egg to cook it on the other side. Also turn the Canadian bacon in the skillet. Remove the egg and Canadian bacon when they are at your desired degree of doneness, and assemble your Egg McMuffin. On one toasted muffin half, place 1 slice of Deluxe American cheese. (You can cut this into a neat circle, using your can as a cutter.) Now, place your cooked circular egg on top of the cheese and your slice of Canadian bacon on top of the egg. Cap off your McMuffin off with the other toasted English muffin half. Serve with some orange slices, and a cup of hot coffee! Better than McD's

Note: You will need a can the size of a tuna can, with both ends cut out with a can opener, washed and dried. (I used a small crushed pineapple can.) 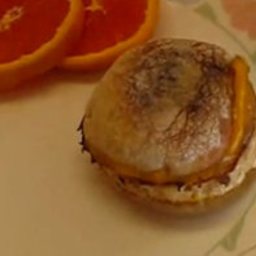 ladybugplus
Note: You will need a can the size of a tuna can, with both ends cut out with a can opener, washed and dried. (I used a small crushed pineapple can.) [I posted this recipe.]
11y
Reply
Reply