Rich and savory. Fried crisp and served with eggs this is a classic farmhand breakfast. Quite a bit of work to make but well worth the effort.

BROTH: Add all broth ingredients in a large kettle and bring to a boil. Then reduce heat and allow to simmer for three or more hours. You can also use a pressure cooker for this stage if desired. In either case cook until all meat falls from the bones then allow it to cool and strain to catch the rich broth. Separate the meat from the bones and gristle reserving all the meat. Chop the meat up finely.

MEAT: While the broth is simmering, fry the sausage and liver. Break it up finely while it cooks. Add the SPICES & FLAVOR ingredients to the pan and continue cooking until the meat is well browned. When available, add the finely chopped meat from the pork broth and mix well. Taste the mixture and adjust the seasoning to your taste. It should be quite strongly flavored at this point as the grains will dilute the flavors quite a bit.

At this stage grease 3 - 4 loaf pans or other baking containers. You won't have hands/time free to do this later as the grains require nearly continuous stirring and attention.

GRAINS: Bring the pork broth in the large kettle up to a boil. Add in the cornmeal slowly with continuous stirring. Reduce heat and continue stirring while it starts to thicken. Slowly add in the oatmeal and continue stirring. As the mixture thickens start adding in the flavored, browned meat. Include all of the drippings from the meat pan. Continue cooking over medium-low heat until a thick porridge is formed. Add more water or broth as needed to adjust the mixture to a thick, barely pourable, consistancy.

Taste the porridge and adjust the spices as desired. The mixture should have a definite "Breakfast Sausage" flavor to it.

Pour the porridge into the prepared loaf pans and allow it to start cooling. Move the pans to the refrigerator to chill. When chilled the scrapple may be removed from the loaf pans and wrapped in plastic to be frozen if desired. The frozen loaves keep for several months in the freezer.

To prepare & serve: Thaw if needed. Cut slices about 3/8 inch thick. Fry as you would sausage patties or French toast. You want a browned, crisp exterior and warm, soft interior. Serve with fried eggs. Top the scrapple slices with molasses or maple syrup as desired.

I have enjoyed scrapple and eggs for years. The packaged brand has been discontinued in most grocery stores so I researched and developed this recipe. It is so much better than the store bought version that I won''t buy any more even if it becomes available. 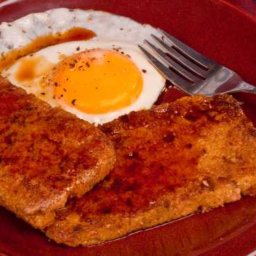 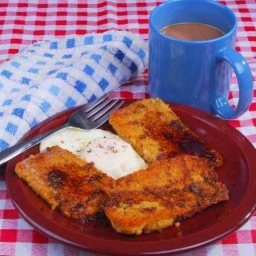 promfh
I have enjoyed scrapple and eggs for years. The packaged brand has been discontinued in most grocery stores so I researched and developed this recipe. It is so much better than the store bought version that I won''t buy any more even if it becomes available. [I posted this recipe.]
12y
Reply
Reply