I'm from the South and I grew up loving Chicken & Dumpins. I couldn't find a recipe online for Chicken & Dumplins like I grew up with. I e-mailed a lady who cooked them right and she sent me the recipe. She's one of the cooks that don't measure when they cook, they just do it. She sent me this recipe. I cooked it for Christmas and it's great!

1.Add Chicken Breast to about 6 cups of water. Boil chicken until done. Remove bone and meat to a plate, strain broth retaining broth into a large boiler.

2. Put broth from chicken in a large pot. Add 1 can Campbell's Cream of Chicken soup to broth and bring to a boil over medium heat. Add bay leaves and chicken bouillon cubes

3. Mix flour salt and pepper in a bowl.

4. Once broth and soup are combined take 1 cup broth mixture and add to flour mixture.

5. Add buttermilk, egg, butter and stir until it is a pasty dough turn out on pastry sheet and work in small amounts of flour (you’ll work in about a cup and a half of flour) until it holds together good.

6. Shred the chicken fine and add to broth. Add additional broth until it gets to desired consistency. (You’ll want a little more than what you want your final consistency to be, the dumplings and simmering will condense it considerable.

7. Roll out to bout 1/8th inch thick cut into squares and drop into soup and cook 45 minutes until tender. Stir occasionally.

I accidentally burnt mine the first time I made it. It didn't turn black, it was a golden brown and actually made it taste better, it gave it a roasted chicken flavor. So if you mess up, it's okay- there's room for error. 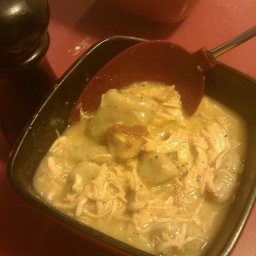 Saraboysen
I really liked this a lot. I used boneless breasts and cream of celery soup with great results. There was double the amount of dumplings that would fit in the pot though. I will cut that down next time.
2y
Reply
Reply

dustinhood
I posted this recipe. This is how Chicken & Dumplins are suppose to taste!
9y
Reply
Reply