Try this Hot and Sour Shrimp Soup - Tom Yam Goong recipe, or contribute your own.

* Galangal: A relative of the ginger root, galangal is pale yellow and has a delicate flavor.

A subtle blend of hot and sour with citrus overtones, Tom Yam Goong is the most famous of all Thai Soups.

Each region has its own particular variation of the recipe. This recipe is from Bangkok and the central plains.

Rinse the shrimp shells and place them in a large pot with the water. Heat to boiling, strain the broth and discard the shells. Add the garlic, lime leaves, galangal, fish sauce, lemon grass and shallots to the stock, then the mushrooms and chili peppers, if using. Cook gently for 2 minutes. Add the shrimp to the soup, and reheat to boiling. When the shrimp are cooked, place the lime juice and chili paste in a serving bowl. Pour the soup into the bowl, stir, garnish with the cilantro leaves and serve.

We've had some success with putting the lemon grass, lime leaves, and galangal in a mesh bag. That way they are easy to remove from the broth later to avoid the little "woody bits" that sometimes get in the soup.

Each (6 oz) serving contains an estimated:

The high sodium content is from the Fish Sauce. If you are sodium sensitive cut back on the Fish Sauce a bit. I've never seen a "low sodium" fish sauce but one might be on the market. 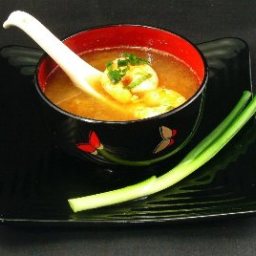 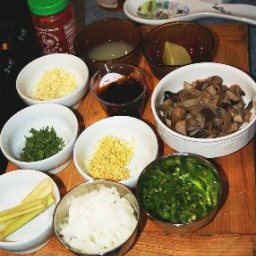 promfh
[I made edits to this recipe.]
16y
Reply
Reply

promfh
[I made edits to this recipe.]
16y
Reply
Reply

promfh
[I made edits to this recipe.]
17y
Reply
Reply

stevemur
[I made edits to this recipe.]
17y
Reply
Reply

promfh
Since we have Kaffir limes growing in the yard and live on the Texas Gulf this soup of one of our favorites. We get fresh shrimp and pick fresh leaves and lemongrass from the garden when we make it.
17y
Reply
Reply