"Nothing beats a mug of hot cider on a cold winter day. This recipe is great as it calls for fresh apple cider and pure maple syrup. Start with only 6 strips each of the orange and lemon peel, and adjust to taste."

Pour the apple cider and maple syrup into a large stainless steel saucepan.

Place the cinnamon sticks, cloves, allspice berries, orange peel and lemon peel in the center of a washed square of cheesecloth; fold up the sides of the cheesecloth to enclose the bundle, then tie it up with a length of kitchen string. Drop the spice bundle into the cider mixture.

Place the saucepan over moderate heat for 5 to 10 minutes, or until the cider is very hot but not boiling.

Remove the cider from the heat. Discard the spice bundle. Ladle the cider into big cups or mugs, adding a fresh cinnamon stick to each serving if desired.

Can also use a slow cooker/ crockpot

"I just added one thing which is an old trick I recently learned from a New York State apple farmer who's family has been making hot cider for 150 or so years. Thinly slice and or chop up some McIntosh apples including the peel into small pieces and drop a small bunch of the apple pieces into each cup of hot cider just before serving.

This was a big hit at my party! It was unseasonably warm that day, so many people let the cider cool off before they drank it, and it was still great. I took the advice of several reviewers. To cut down the sweetness I started with a "natural" pressed cider (read: No Sugar Added) and I used all the maple syrup called for, but I used a syrup that had less sugar in it ("light"). The fruit I just sliced up and let float (but removed it after about an hour), and I used ground cinnamon (1 tsp) and ground allspice (1/2 tsp). I will definitely be making this again!!

Just made this at Thanksgiving this year and it was WONDERFUL! I saw that others had said it was a little too sweet with all of the syrup, so I used the 1/4 cup syrup with a gallon of unsweetened apple cider, and it was perfect. I also let it simmer on the stove for an hour and then removed the fruit and spices. Everyone raved about it and wanted the recipe.

This is amazing. I made this to drink with our Thanksgiving feast and it was a HUGE hit. I made this in my crock-pot on high heat rather than my stove and it worked really well. I left the spices in much longer than the ten minutes that the recipe says, because after ten minutes it wasn't very flavorful. I ened up leaving the spices in for a couple of hours and it came out tasting amazing. Also, I used a gallon of unfiltered, unsweetened apple juice and I think that really helped with the flavor too.

Everyone who is has tried this thinks it's wonderful! I made some in a crockpot at work and the citris turned it bitter after a few hours so be sure to remove the peels if you're letting it simmer for a long time." 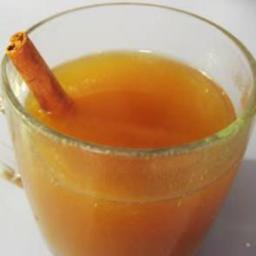