Try this Hot Pepper Pumpkin Scones recipe, or contribute your own.

Preheat oven to 375 degrees. In a small skillet, saute the apple sauce, chopped onion and jalapeno and stir until onion is soft (about 2 minutes). Dont stop stirring! Set aside to cool. In a large bowl, mix the flour, baking powder, soda, cinnamon,ginger, allspice, salt, and sugar. MIx in the sauteed apple sauce, diced peppers and onion until mixture resembles grains of rice. Make a well in the center and add sour cream, pumpkin puree, egg whites and raisins to the well. Mix together with a fork and gradually work in the mixture until a soft, cohesive dough forms. Drop the batter 1/3 cupful at a time 2 inches apart on a Pammed or nonstick cookie sheet. Bake for 20 minutes, until puffed and firm on surface, but fluffy in the center (mine tend to be somewhat elastic on the surface and lightly moist inside). Transfer to a cooling rack, cover loosely with a dish towel and cool for at least 5 minutes. Mix honey with the jalapeno sauce and brush tops of the scones with this mixture before serving. Careful, theyre addictive! Posted to fatfree digest by halsalhb@UCBEH.SAN.UC.EDU (h brian halsall) on Apr 4, 1996, 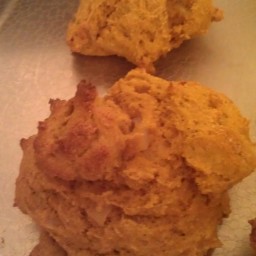