Try this India-Short Rib Grilled Cheese Sandwich recipe, or contribute your own.

To Make the Short Ribs

Beginning with a large saucepan or braising pan with a lid, heat the tablespoon of grapeseed oil over medium-high heat. Season the short ribs with salt and pepper. Sear the short ribs on either side until caramelized and golden brown, about 5 minutes. Remove the meat from the pan. Add the carrot and celery to the pan and cook for 5 minutes over the same heat. Add the onion and garlic. Cook together until caramelized, about 5 minutes, stirring occasionally as needed. Add the short ribs back to the pan and deglaze with the red wine. Add the sachet and, stirring from time to time, allow the wine to reduce until almost evaporated, about 6 minutes. Pour in the beef broth and bring the braise up to a boil. Put the lid on and place in the oven for 2 hours. Stir occasionally.

After the first 2 hours of cooking time, remove the lid. For the next hour, baste the short ribs every 15 minutes, leaving the lid off. Cook for an additional hour, until very tender, for a total of 4 hours cooking time.

Pull the short ribs from the oven and allow them to cool in the braising juices for at least a few hours. Carefully transfer the meat to a plate and strain the juices through a fine sieve, then allow the fat to rise. Remove the fat. Using a dinner fork in each hand, lightly shred the meat along the natural grains in a pulling motion from the center outward, and set aside.

To Prepare Each Sandwich

Begin by preheating the oven to 350°F.

Take 2 slices of bread. On the bottom slice, place a layer of cheese, just enough to cover the bread to the edges, then top with 1 teaspoon of pickled red onion, spread to the sides. Place ¼ cup of the pulled short ribs on top, add another layer of cheese, and top with the second slice of bread. Brush each completed sandwich on top and bottom with ½ teaspoon butter.

In a cast-iron pan over medium-high heat, add 1 teaspoon of the grapeseed oil and allow it to get nice and hot. Place 2 sandwiches in at a time and flip so they will absorb the oil on both sides. Weight them down with a small sauté pan. After 1 minute, flip the sandwiches, return the weight, and place directly in the oven.

After 2 minutes, remove the weight. Flip the sandwich one final time, and cook for 1 final minute. Pull from the oven, slice diagonally, and serve immediately. Repeat with the remaining sandwiches.

Wrap the parsley, thyme, bay leaves, and peppercorns in a small amount of cheesecloth and tie with butcher’s twine. 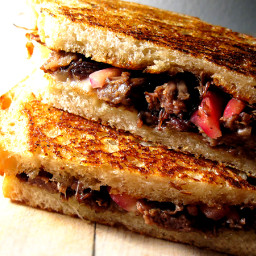