An all-in-one dish that is very comforting and filling on a cold autumn or winter evening.

2. Heat a non-stick frying pan. Add the sausages and gently fry until they are about three quarters cooked and golden brown. Remove from the pan and slice. Parboil the potatoes then thinly slice.

3. Meanwhile heat a large frying pan. Add the 55g/2oz of the butter and once melted add the onions. Cook the onions gently for 10 minutes or until soft and translucent. Remove from the pan and set aside.

4. Add the bacon lardons to the frying pan and cook for 3-4 minutes until golden and crispy. Add the cabbage with 2 tablespoons of water. Cook for 2-3 minutes or until the cabbage is soft, but still holding a little texture. Drain off any fat, remove from the pan and set aside.

Place a layer of sliced potatoes in the bottom of the dish season with salt and pepper and a sprinkling of the thyme.

Top with another layer of sliced potato and season with salt, pepper and thyme.

Spoon over the cooked cabbage and bacon.

Top with another layer of potato slices and season again with salt, pepper and thyme.

Season once again with salt, pepper and thyme.

6. Pour the cream and stock into a pan and add the bay leaves. Place over a gently heat and bring to just below boiling point. Pour over the sausage and potato pie. You want the liquid to just cover the top layer of potatoes. Dot over the remaining butter and cover with foil. Place the dish on a baking sheet. Place in the oven and cook for 1? hours.

7. Remove the foil from the dish and increase the oven temperature to 200C/400F/Gas 6 and cook for a further 15 minutes or until the top is golden. Serve immediately with garlic bread. 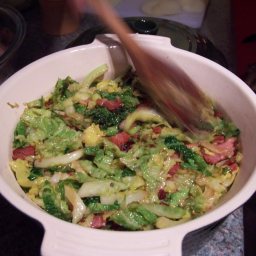 Irish Sausage and Potato Pie nearly ready for the oven.