The Irish make a warm, traditional dish with potatoes and cabbage called Colcannon, which is tasty enough in its own right, but on hot summer picnics this chilled version provides a delightful combination of cool and creamy with crunch!

Peel the potoato(s) and cut them into 3/4 inch cubes.Boil or steam them until tender, but not mushy. Drain and allow to cool.

Combine the ingedients from Miracle Whip through garlic in a large bowl. Fold in the potatoes, onion, cabbage and parsley. Chill thoroughly before serving.

Each (1/2 cup) serving contains an estimated:

This made a nice side to roasted chicken. 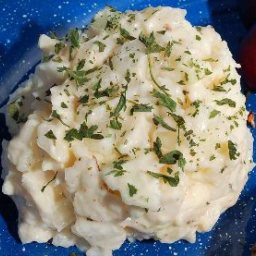 jbooshey
Don't like the raw garlic, but the dish was good otherwise.
3y
Reply
Reply

Fergcx1
We grew cabbage and potatoes in our garden and I needed some ideas to use them in. I've never heard of this salad but thought I'd try it. I made it just as directed (minus the Splenda). It was a hit! Have made it several times and it was devoured at a potluck I brought it to. Delish!
7y
Reply
Reply

katilloyd
Love this recipe. It is easy to make and if you let it sit in the fridge for a couple hrs its even better.
9y
Reply
Reply

katilloyd
So yummy, my kids even like it and its easy to make.
9y
Reply
Reply

Pasquale49
Great! The layers of flavor and texture are full of pleasant surprises.
9y
Reply
Reply

Pasquale49
This is a wonderful potato salad with many complex layers and a surprising finish.
9y
Reply
Reply

promfh
This made a nice side to roasted chicken. [I posted this recipe.]
15y
Reply
Reply