Here is how to make a Italian Bread Pizza, a sausage version and a pepperoni version. These are terrific, tasty, and economical, and you have total control of the toppings! Plus you won't find a crispier crust than this makes!

Before building your pizza, brown the pork sausage in a skillet, stirring constantly, until the sausage is crumbly and done. Drain the sausage and squeeze any excess fat out using paper toweling. Set aside until needed. Now, slice a loaf of Italian bread into three fairly equally sized slices, horizontally. Take the top and bottom slices and put them cut side up in a baking pan. The third (middle) slice can be used later for an additional pizza. Spread the tops of the two slices in the baking pan lightly with softened butter. Place the pan in an oven that has been preheated to 350 to brown the tops. (You don't need to use the cooktop for browning; the oven is easier and quicker.) Watch the bread slices in the oven carefully, because they will brown in about 5 minutes. When they are lightly brown, remove them from the oven, place them on a protected spot on your workspace, and assemble your pizza. First, spread each of the two browned slices of bread lightly with Italian sauce. You will only need about half of the jar of Italian sauce for good coverage. Next, sprinkle one bread slice with cooked sausage, and place as many pepperonis as desired on the other. You will need about half of the sausage and only a small part of the package of pepperoni. The final topping is shredded mozzarella cheese. Sprinkle as much shredded mozzarella cheese on the two pizza as desired. Place the pan with the two Italian bread pizzas in the 350 degree oven. Bake for 10 minutes, and then turn the oven to broil for an additional 4 or 5 minutes, watching the brownness, so that it does not burn. When at your desired degree of brownness, remove your pan of pizzas from the oven, and serve immediately. Use grated Parmesan cheese and shaker hot peppers on top, if desired. Believe it or not, this is one pizza, cooked at home, that is better than one you can get delivered! It is delightfully crispy and crunchy, and you control the toppings and the amounts!!! 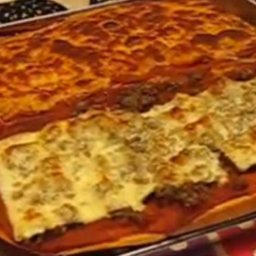