Different meringue types have been named according to countries. French meringue is the one that is whisked, sugared and finally dehydrated in the oven.

The other meringues don't necessarily need to be dehydrated (they can be if desired) but the preparation method pasteurizes them and they still remain soft. Thus they can be eaten as they are and they can replace whipped cream as the filling or topping of a cake, for instance. They may also be refined as meringue buttercream.

They are called as Swiss or Italian meringue. If nothing else such such butter is not added I recommend to keep them in an airtight container or coat them with chocolate like it's done with chocolate kisses since they tend to lose moisture when exposed to air. It they are allowed to set they may become a bit spongy but a quick stir will make them smooth again.

This recipe is about the Italian meringue. Out of the soft meringues it has the stronger and fluffier texture which makes it very popular worldwide, as it is or as a base for the other cremes.

Italian meringue keeps in the fridge for two days until it starts to weep. It is still edible after but not entirely the same in texture.

Its egg whites are pasteurized with hot sugar (so remember caution).

I have also written the recipe in Finnish, here: https://www.kotikokki.net/reseptit/nayta/842976/Italialainen%20Marenki/

1. Make sure that the egg whites are room temperature and put them in a bowl. Add the texture improving sour ingredient in this point (if desired). Whisk them until the foam starts to slightly hold its form but is not yet fully stiff. You may also whisk them stiff but if you intend to pipe this meringue then too much incorporated air may lead into a bumpy result.

2. Bring the sugar and water into a boil in a small kettle, covered with a lid. Remove the lid and lower the heat to medium high.

3. While measuring the temperature of sugar do not push the thermometer all the way to the bottom. If you do not have one then you may drop a drop of sugar into the cold water and see if it has become like resin. Usually boiling it patiently for three minutes will be enough.

4. Remove the sugar off the stove when it reaches 118°C. It should not be boiled into caramel.

5. Add the hot sugar into the egg white foam as a thin stream while it's still getting whisked. Pour it almost to the edge but avoid going all the way so it won't stick onto the bowl. You will get a strong and smooth meringue in which the sugar is not crystallized.

6. Add the food coloring if desired as well as the flavoring which can be powder, extract or oil.

7. If you intend to use the meringue as a base for cremes, wait until it has cooled all the way to the room temperature (touch the bowl).

While making meringue the egg whites should be fresh and in room temperature which improves their elasticity. The tools should be as clean as possible, especially out of fat. A quick wipe with a small amount of lemon juice or vinegar may help.

Plastic is an oil based compound and it may release something into the food and so it's recommended to avoid the dishes made out of it or coated with it what comes to storing the egg whites. Fat also sticks to plastic easier.

While separating the eggs the whites should have zero egg yolk; besides fat it also prevents the fluffiness. Sometimes you may get an egg in which the yolk breaks easily and so it's recommendable to separate each egg in a separate bowl, one at a time.

Adding a small amount of sour ingredient before whisking such as a pinch of cream of tartar or a few drops of lemon juice or vinegar helps in reaching the more stable texture. It's voluntary and barely affects the taste. Avoid adding salt too early.

Do not pipe the meringues too closely for the oven, they need air even if they don't grow in size.

You may also dab a small amount of meringue between the corners of baking sheet and baking paper to make the work easier. 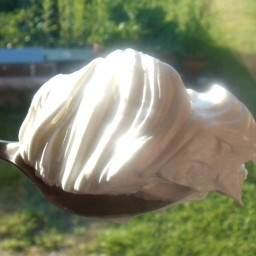