A GREAT variation of a standard way to serve chicken. The jerk seasoning really adds a special touch. You can increase or decrease the heat level of this dish by either adding additional spice or sour cream to the finished product.

1. Mix the Lime sour cream by adding all the ingredients together and stirring well. Set it in the refrigerator until your ready to serve.

Do the same with the lettuce.

2. Start a pan going on Med high with the butter and oil. The oil will raise the burning point of the butter.

3. Slice the red and green peppers into strips, slice the serranos into rings, and chop the onions. Add all to the pot. then add 1 1/2 teaspoons of the "jerk" blacken.

4. While the peppers are cooking, make the "rub" by mixing 3 tablespoons of the Blacken, and 3 teaspoons of Kosher salt in a bowl.

5. Slice the chicken in half making two thin breasts. Place one on top of the other and cut, on an angle, into 3/8" wide strips. Place the chicken into the bowl with the rub and mix well.

6. When the vegetables are about 1/2 done (they should be just beginning to get soft), take them out and place them in a bowl

7. Turn the heat up to high, add a couple of tablespoons of oil to the pan, then add the chicken. The chicken cooks pretty quick, and - just like when cooking shrimp - it will get tough and dry if overcooked, so be careful.

8. When the chicken is nicely browned on both sides, add the peppers back into the pan and toss well. Put a lid on and let it cook about 5 more minutes.

Place the finished meat mixture on a roll, add some of the chopped lettuce, and a dollop or two of the lime sour cream.

Melt 2 tablespoons of butter, and brush it on the tortillas. Place the tortillas on a sheet pan and place in a 200 degree oven for 5 minutes or so. This will soften them up so that they will roll up easier. Place some of the meat mixture on the tortilla, then add some lettuce and the lime sour cream. Roll up by first folding up the bottom, then bring over one side, then the other. If a little of the sour cream gets on top of the first roll, that's good. A little sour cream will help the final wrap to hold in place. 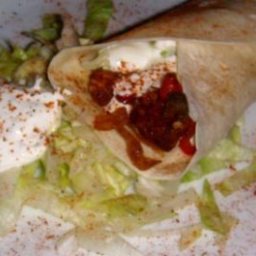 Keleynal
My entire family loved this. I didn't have the specified rub so I substituted a rub I had on hand and added some allspice to make it a little sweeter. The lime sour cream was amazing!
9y
Reply
Reply