In a large cast iron pot, or heavy-bottomed braising pan add the bacon and fry until crisp. Remove from the pan and drain on a paper towel.

Preheat the oven to 200 degrees F. Cut the bread lengthwise and put in the oven.

Add the pork to the bacon grease, and cook on medium-high heat until the pork is 3/4 cooked. Next add the sausages, onions, and bell peppers and cook until the onions are translucent.

Add the chicken, celery, garlic, parsley, and 3/4 cup green onions. Cook until chicken is tender, then season with salt, pepper, and cayenne. Stir in the water and combine thoroughly. Cover and let sit for 15 minutes.

Evenly divide the meat mixture and cheese to each loaf. Top the cheese with the bacon and remaining green onions. Cut the loaves in half and serve. 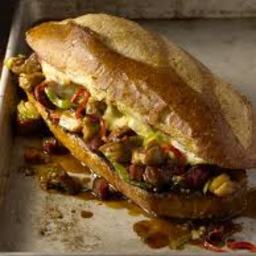 karilindeman
The first time my husband and I made this, it was even better than we imagined it would be! It was quite spicy due to the cayenne but that was fine with us. We plan to make it again really soon - even the leftovers were good as long as you have fresh bread!
5y
Reply
Reply