Kale with Garlic And Bacon Try this Kale with Garlic And Bacon recipe, or contribute your own.

In a large heavy skillet cook the bacon over the moderate heat, stirring, until it is crisp and transfer it to paper towels to drain. In the fat remaining in the skillet cook the garlic, stirring, until it is golden, add the kale and the water, and simmer the mixture, covered, for 10 minutes, or until the kale is wilted and tender. Simmer the mixture, uncovered, until most of the liquid is evaporated and stir in the bacon and salt and pepper to taste. Serves 2. Gourmet January 1993 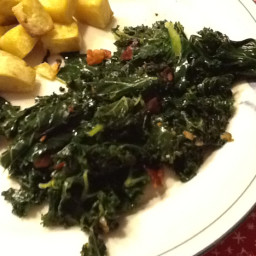 foodlover92414
First time eating Kale, and I loves this quick recipe. . Next time I will you less water
5y
Reply
Reply

TonyBeardotcom
My version used pre-cooked bacon with a sprinkle of rice vinegar once it hit my bowl. A little less fat and calories and still came out very flavorful. Also used a little less water.
6y
Reply
Reply

KatieKitchen
next time I'll omit the extra water, or just add a tablespoon or two. The kale has water itself and could cook quicker too without extra water. maybe add lemon juice at end?
7y
Reply
Reply