Try this Kathy Pitts Breakfast Tacos recipe, or contribute your own.

Place bacon in a cold pan, and cook until almost crisp. All the fat should be rendered. Remove bacon from pan, and drain. Place potato chunks in the pan, and cook, turning occasionally, until well browned and crisp. Cut bacon into 1 inch pieces, and add to potatoes. Immediately pour eggs over the potato/bacon mixture, and cook, stirring frequently, until soft-scrambled. Spoon mixture into heated flour tortillas, and roll or fold. Serve with pico de gallo, hot sauce, chopped cilantro, jalapeno peppers to be added as desired. In actuality, the filling can be darn near anything you have handy (eggs optional). Leftover fajitas are great, as is Mexican-style chorizo (which makes the greasiest breakfast tacos known to man, if you dont drain the cooked chorizo mixture VERY well before adding the eggs). Cheese may be added to the mixture, or sprinkled on the cooked ingredients before rolling. Kathy in Bryan, TX Posted to FIDO Cooking echo by Kathy Pitts from Dec 1, 1994 - Jul 31, 1995. File ftp://ftp.idiscover.co.uk/pub/food/mealmaster/recipes/kpitts.zip 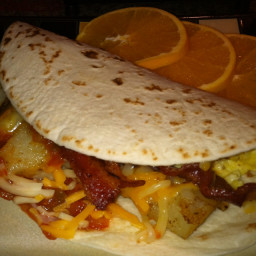 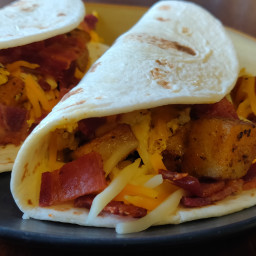 mommyluvs2cook2
Pretty basic but good! I think salt and pepper should be in the ingredients. Served topped with cheese and salsa :)
3y
Reply
Reply

robbgriffin
Perfect breakfast tacos. I cubed the potatoes (1/2") and boiled while bacon was cooking. Then fried in some of the bacon grease with a little butter. Topped with cheese and salsa.
9y
Reply
Reply