Jambalaya is traditionally made in three parts, with meats and vegetables, and is completed by adding stock and rice. It is also a close cousin to the saffron colored paella found in Spanish culture.

Creole jambalaya originates from the French Quarter of New Orleans, in the original European sector. It was an attempt by the Spanish to make paella in the New World, where saffron was not readily available due to import costs. Tomatoes became the substitute for saffron. Now Creole jambalaya includes tomatoes, whereas Cajun jambalaya does not.

* Note: See the "Bayou Blast - {Emeril's Creole Seasoning}" recipe which is included in this collection.

In a large Dutch oven, heat 2 tablespoons of the olive oil over medium-high heat. Season shrimp with Creole seasoning and saute until almost cooked through, about 4 minutes. Using a slotted spoon, remove shrimp and set aside until later.

Season chicken pieces with Creole seasoning. Add remaining olive oil to Dutch oven and when hot, add chicken pieces and saute until browned on both sides, about 8 minutes. Remove and set aside.

Add sausage and cook until browned. Add onion, celery, bell pepper, garlic, bay leaves, cayenne and thyme and cook until vegetables are wilted, about 6 minutes. Add tomatoes and water and return chicken pieces to pot. Season with salt and pepper and simmer, covered, for 20 minutes.

Add rice to pot, stir well and return to a boil. Reduce heat to low, cover pot, and cook for 15 minutes. Add shrimp, green onions and parsley to Dutch oven, mixing carefully, and continue to cook, covered, for another 10 minutes. Remove from heat and let sit 10 minutes before serving. 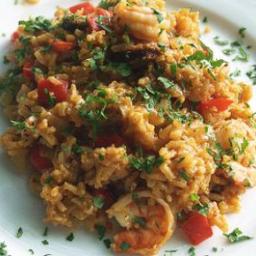 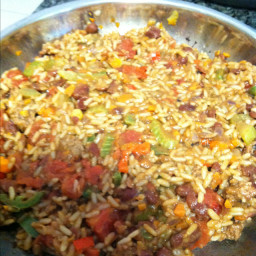 "Make this ahead and keep it in stock!" —  Firebyrd

RhumBaba
I've tried many jambalaya recipes that were great. This one, though, is THE KEEPER. Thanks again, Firebyrd!
5y
Reply
Reply

jamesamal
Wasn't difficult to make. Everyone loved it. Including my brother in-law who loves spicy foods and myself, who doesn't like too much hot/spicy foods. Just the right amount of spicy heat.
7y
Reply
Reply

jamesamal
I made this with my sister for sunday football dinner. Her family loved it. It smelled great during cooking and tasted even better.
7y
Reply
Reply

MauraSpeckt
Great ingredients=great recipe. I used everything fresh from our own garden for a lovely and very filling lunch. Every bite was packed with flavor and smoky delightfulness that this type of food is famous for. Whats great is once you chop everything up you just start throwing things into the pot and that's that!
8y
Reply
Reply

andreweulass
Excellent recipe! Once all the prep work is done, the cooking is pretty easy. Really loved it.
8y
Reply
Reply