Try this Korean-Style Chicken Thighs with Sesame Cucumber Salad and Jasmine Rice recipe, or contribute your own.

Wash and dry all produce. Pat chicken dry with a paper towel and season all over with pepper. Sprinkle evenly all over with cornstarch. Rub cornstarch into meat to moisten and evenly coat. Quarter lime. Peel cucumber, then halve lengthwise. Scoop out seeds with a spoon and discard. Slice flesh into thin half-moons. Trim and thinly slice scallions, keeping greens and whites separate. In a medium bowl, toss together cucumber, scallion whites, vinegar, 1 TBSP sesame oil, 1 tsp sugar, and a large pinch of salt and pepper. Place rice, ¾ cup water, and a pinch of salt in a small pot. Bring to a boil, then cover, lower heat, and reduce to a gentle simmer. Cook until tender, about 15 minutes. Keep covered off heat until meal is ready. Heat a large drizzle of oil in a large pan over medium-high heat (use a nonstick pan if you have one). Add chicken and cook until surface is crisp and a deep golden brown, about 6 minutes per side. While chicken cooks, combine soy sauce, 2 tsp sesame oil, 4 tsp sugar and sriracha in a small bowl. Once chicken is done, remove from pan. Discard excess oil and let pan cool off heat for about 30 seconds. Add soy sauce mixture to pan and let bubble using residual heat. (TIP: If sauce doesn’t bubble, heat pan over medium-low heat until it does.) Return chicken to pan and flip to coat. Fluff rice with a fork, then stir in remaining sesame oil, a squeeze of lime, and half the scallion greens. Season with salt and pepper. Divide rice, chicken, and cucumber salad between plates. Drizzle with any remaining sauce in pan. Sprinkle with sesame seeds and remaining scallion greens. Serve with remaining lime quarters. 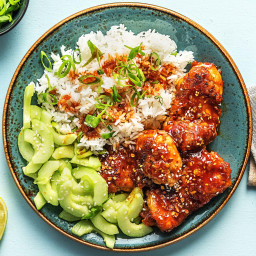