This is a basic recipe that can be added to and varied in a multitude of ways. Originally from Scotland this is a savory favorite of the country.

Chop up the leeks and potatoes then simmer in the salted water until tender.

Adapted from Julia's Kitchen Wisdom: Essential Techniques and Recipes from a Lifetime of Cooking by Julia Child (Alfred A. Knopf, 2000). Copyright 2000 by Julia Child.

The master recipe and variations (Primal Soups) are the basic soups, the least complicated and often the most loved.

Onion and Potato Soup: Substitute onions for leeks, or use a combination.

Cream of Leek and Potato Soup: After simmering the preceding soup, puree it and whisk in ½ cup heavy cream. Reheat to the simmer again before serving.

Cold Soups, such as Vichyssoise: Puree any of the above, stir in ½ cup cream, and chill. Correct seasoning just before serving, stir in chilled cream if you wish. Top each bowl with minced fresh chives or parsley (or fresh watercress leaves).

Soupe Du Jour: Meaning add anything else you have on hand, such as cauliflower, broccoli, green peas, spinach, cooked or raw. This is how you may come up with some of your own marvelous ideas and secret "house recipes."

How to Prepare Leeks: Trim off the root ends, keeping the leaves attached. Cut off tops so the leeks are 6 to 7 inches long. Starting ½ inch from the root and keeping leaves attached, slit each leek lengthwise in half and then in quarters. Wash under cold running water, spreading the leaves apart to rinse off all dirt. Leeks can be braised whole or sliced crosswise into pieces for soup. To julienne, cut leeks crosswise into 2-inch pieces, press leaves flat, and slice lengthwise into matchsticks.

To Puree a Soup: To use an immersion blender, set the machine upright in the center bottom of your soup pan, turn it on and move it around, but do not bring it to the surface. To use the food processor, strain the soup and turn the solids into the processor, adding to them a little of the liquid, then process, adding a little more liquid as needed. To use the vegetable mill, strain the soup and add the solids gradually to the mill, passing them through with small additions of the liquid. 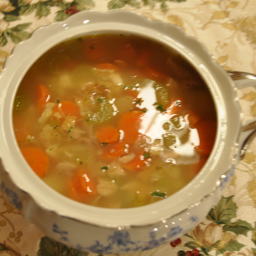 This variation of the soup adds chicken broth, celery and carrots. 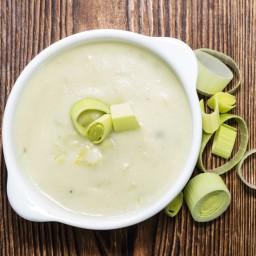 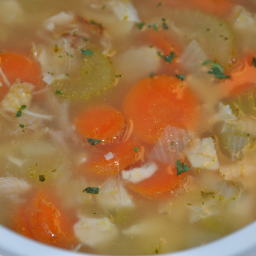