Set out a 9- or 10-inch-diameter tube pan with flat (not fluted) sides. Leave the pan ungreased; the cake will grip the sides as it bakes and rise higher than it otherwise would. Heat the oven to 325º F.

Sift the flour, cornstarch, and salt into a bowl. Sift the mixture a second time and then set it aside.

In a large mixing bowl, beat the egg yolks and 1 cup of the sugar with an electric mixer on medium-high speed for 5 minutes, scraping down the bowl once or twice. When you're done, the mixture should be thick, light, and greatly multiplied in volume. Then mix in the lemon and orange zests and juices and the vanilla extract on a very low speed for a few seconds, just until blended. Set aside.

Bake the cake on the center oven rack, without opening the oven, for 50 minutes. When done, the cake will be a rich golden brown and a thin skewer or toothpick inserted into its center will come out clean.

Remove the cake from the oven and immediately invert the pan onto a wire rack (if you keep the cake right side up, it will compress). Leave the cake in the pan until it is completely cooled, at least 3 hours or overnight.

To remove the cake, run a thin-bladed knife up and down around the outside of the cake as well as around the center tube. Gently lift the cake from the pan by the tube. Then run a knife under the cake.

Invert the cake onto a plate and remove the tube. Gently rub your fingers around the side to remove any loose crumbs (it will make the finished cake look more attractive). Finally, invert the cake once more onto a serving plate so that it is right side up.

For the icing, combine the confectioners' sugar, butter, lemon juice, lemon zest, and about half of the orange juice in a medium mixing bowl. Whisk well, gradually adding more OJ as needed, until the glaze is smooth and fluid. Generously spoon the glaze over the cake, letting it run down the center hole and sides. Slice the cake with a serrated knife (a parent's job) and serve. Makes about 10 servings. 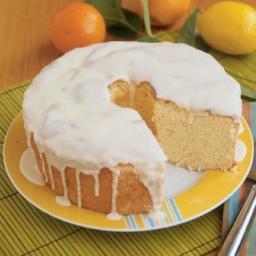