Try this Lime Ginger Marmalade recipe, or contribute your own.

Cut off the narrow wnds of the limes and discard. Cut the peel from the limes, slice thinly and add to a saucepan. Add enough water to cover the peels and bring to a boil. Boil hard for 5 minutes and then drain.

Chop the insides of the limes and remove any seeds as you come across them, and add to a pot with the drained peel. Add the 6 cups water and bring the mixture to a boil. Boil for 5 minutes.

Cover the pot and let it stand for 12 to 18 hours in a cool place. After the soak, bring to a boil over high heat. Boil until the peels are very tender. Measure the amount of peel and liquid you have. Return it to the pot and add 1 cup of sugar for each cup of peel/liquid minture you have, stirring well until the sugar dissolves.

Meanwhile, pour the ginger beer in another pot over high heat. Bring to a boil and reduce by two-thirds or until you have about 2 cups left.

Add the ginger beer syrup and smashed ginger to the fruit and return the mixture to a boil while stirring constantly until the mixture passes the gel test (and reaches 221-degrees fahrenheit, about 1 hour of boiling and stirring. Turn off the heat and let sit for about 5 minutes. Remove ginger pieces.

Use a ladle to add to jars leaving 1/4 inch of head space. Clean rims carefully with vinegar. Place lids on jars. Process in boiling water bath that covers the jars by at least 2 inches. Process the jars for 15 minutes. 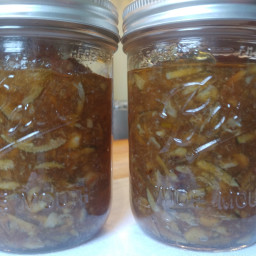