Lots of brownie recipes out there, but I promise you have never seen or tasted anything like this. I actually came up with this by combining several things my wife loves into one brownie.

Prepare brownies as usual - you will typically need an egg, 3 tbs. of water, and 1/3 cup of oil, that I did not put in the ingredient list above.

After brownies have cooled, frost with Nutella.

"Cashew Clusters" are a snack treat sold at Costco. They are clusters of cashews, almonds, pumpkin seeds, salt and honey. I suppose you could make your own if you don't live near a Costco. Chop the clusters with a knife into smaller bits. Spread the chopped Cashew Clusters evenly over the brownie, pressing them gently into the Nutella layer.

Now, make the drizzle by mixing the cream creese, brandy extract, and sugar. Drizzle over the top of the brownie. 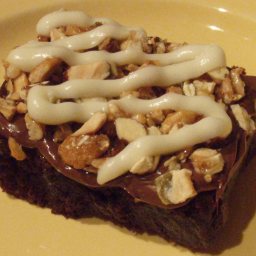