Try this Loaded Crash Hots recipe, or contribute your own.

Source: Recipe from The Pioneer Woman

1) Boil the potatoes in lightly salted water in a medium saucepan over medium heat until fork-tender, about 12 minutes. Drain and dry the potatoes completely.

4) Meanwhile, cook the bacon in a skillet over medium heat, flipping as needed, until crisp, about 12 minutes. Set aside.

5) Remove the potatoes from the oven and immediately sprinkle the cheese on each, letting it melt slightly. Transfer the potatoes to a platter and top with a touch of sour cream. Crumble the bacon and distribute over the potatoes. Sprinkle over the chives and serve. 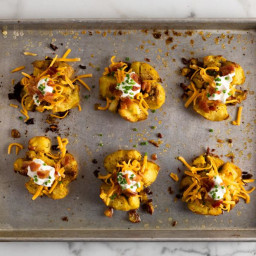 TraskL
I loved these!! There is a crispiness to the tops and the bottoms that are wonderful, and the centers are soft and delicious. We will be having these again!!
1w
Reply
Reply