Scrub the potatoes, dry them and prick with a fork 3 or 4 times on each side. Place the potatoes on a microwave safe plate and microwave on high for 5 minutes. Turn the potatoes over and continue cooking 8 to 10 minutes more, until tender when pierced with a fork. (Times will vary according to your microwave.)

Let the potatoes cool a few minutes for easier handling. Cut the potatoes in half lengthwise. Holding one half of potato in one hand, use a small teaspoon to scoop out the inside, leaving 1/4 inch of potato on the skin. Continue in this manner until you have scooped out all 12 halves. Use the scooped out inside of potatoes for another use. Cut each half into half and you will have 24 skins to prepare for topping. Sprinkle the inside of the potato skins with one half of the salt and pepper. Spray the inside and outside of the skins with the cooking spray. The skins will be baked empty first.

Preheat oven to 475. Place a baking sheet in the oven to heat at the same time.

Meanwhile, fry the bacon until crisp and drain on paper towels. Crumble or chop and set aside. Wipe the skillet clean and heat the olive oil. Cook the onion and jalapeno pepper for about 10 minutes or until softened and golden in color. Add the onion mixture to the bacon. Set aside to cool.

Toss 1 1/2 cups of shredded cheese with the cornstarch. Add the cheese to the bacon and onion mixture.

When oven and pan have reached to temperature, place the prepared skins on the hot pan. Roast the skins for about 15 minutes and remove from oven.

Place a heaping spoonful of bacon, onion and cheese topping on each skin. Use the remaining 1/2 cup of cheese to sprinkle on top of the skins and bake for 5-7 minutes until all is heated and cheese melts. 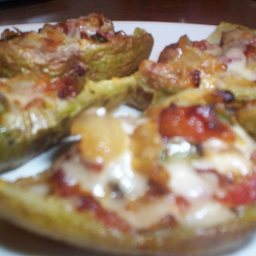 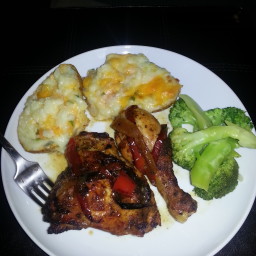 I recommend following it with this recipe

"Using the scooped out potato from Loaded Potato Skins for the mashed potatoes required for this recipe is a great way to use leftovers." —  weckle

"Think of a great loaded baked potato flavor with the extra zing of ranch dressing and then roasted potatoes that are slightly crispy as opposed to fluffy and baked. These potatoes make a great side dish with most anything, and just perfect for a barbeque or pot luck dinner. Try it; your family and friends will thank you!" —  Firebyrd

Jewelzak
Made these for the 49ers and Seahawks game. Huge hit! Everyone loved the jalapeño and thought I should have added the seeds for spice. I changed the recipe by using the potato I scooped out of skins and adding butter, seasoning, cheese, and jalapeno mix. Did not use corn starch. The outside was nice and crispy and the inside was sooo yummy!
8y
Reply
Reply

OaxacaCookin
Took these to a pot luck and they were a hit. I followed the recipe as written. Thanks for posting. I will make again.
8y
Reply
Reply

kacimichellewallace
I made this with red potatoes, and it was GREAT!!! Definitely making this again!!!
9y
Reply
Reply

Wonderthuy
I liked this recipe, but do not love it because I think it's missing flavor. I really do love using the microwave because it speeds up the pace. If I can figure out what it's missing then this recipe would be perfect.
10y
Reply
Reply