In a large skillet heat 1 teaspoon oil and cook beef and pork, stirring occasionally, until browned, about 5 to 6 minutes.

Add onions, bell peppers, celery, salt, cayenne and black pepper. Cook, stirring often, until the vegetables are wilted, about 10 to 12 minutres. Add the garlic and cook for 2 to 3 minutes.

Dissolve the flour in the water and add to the meat mixture. Stir until the mixture thickens slightly, about 3 minutes. Remove from the heat and add green onions. Mix well and let cool.

In a mixing bowl, sift together flour, salt and baking powder. Cut in the shortening until mixture resembles coarse meal. In a small bowl, beat the egg with the milk. Gradually add the egg mixture to the flour mixture, working it to make a thick dough.

Pinch off a medium size ball of dough. Roll out ball of dough on lightly floured surface until you get approximately 5 inch cirlce. Place about 1/4 cup of meat filling in the center of each round and brush edges lightly with egg wash. Fold edges together and crimp closed with a fork.

Heat oil in a deep pot or electric deep-fryer to 360 degrees. Fry the pies, in batches, until golden. Drain on paper towels and serve immediately.

Place the egg, garlic, lemon juice, parsley and green onions in a food processor and process for about 15 seconds until pureed. With the processor running, pour the oil through the feed tube in a steady stream. Add the cayenne, mustard and salt.

Right out of Natchitoches, Louisiana. 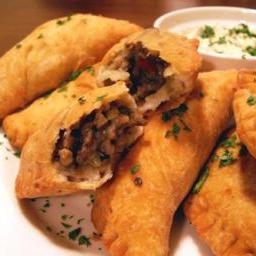 cleverkt
We absolutely loved these. I had made a huge batch at the beginning and froze some. It was happiness when we were ready for something tasty without the effort.
6y
Reply
Reply

cleverkt
This was just one of those recipes I stumbled on and loved the sound of the flavors, but I wasn't sure I'd be keen on the effort. Having put in the time (2 hours) on a stormy night, I now know this is totally worth it. If you can, make a double batch to keep some individually wrapped in the freezer. Very worth it.
6y
Reply
Reply

pkaufman
These were easy and delicious. The pastry is so light and flaky! Will make these again.
6y
Reply
Reply

beece
Lived in Louisiana forever and had these so many times and this recipe makes an awesome meat pie! Thanks for sharing. Will def. Be making again soon!
7y
Reply
Reply

atarah81
It was a hit in my house of 4 picky daughters. Thanks
7y
Reply
Reply

pepperstewart
This was very good. It was simliar to a meat pie I had at a local festival growing up. Next time I am going to try adding potatoes and cheese to it. Thank you for posting!
7y
Reply
Reply