"Carbquick" that makes many of your favorite recipes possible, and tastier than ever before, without the side effects of regular flour. This flour has only 2g net carbs per 1/3 cup and tastes a lot better than soy flour! It makes great pancakes, waffles, cheese cake but the recipe that I think you will really savor the most is the pizza!

A giant 16 inch pizza! The Carbquick box has a recipe for a 12 inch white pizza. My recipe doubles the dough ingredients and lists my homemade tomato pizza sauce recipe so that you will be able to make a large 16 inch pizza and enough sauce left over to make 3 more pizzas ( just freeze in Tupperware for later.)

Take the first 9 ingredients and combine them in a pan, bring to a boil and the put on low heat covered and simmer for 30 minutes stirring occasionally.

Preheat oven to 400 degrees. In a bowl mix hot water and Carbquick, until soft dough forms, then knead from 2-3 minutes or until dough is dry and no longer sticky (Addition water may be needed but be patient). Spread a little Carbquick in a 9 inch pie tin then spread the dough by hand in the pan (short cut cheat I mentioned in the intro!). Next, put a little Carbquick on a cutting board and a little on you rolling pin, (No rolling pin use a wine bottle or round glass), and roll the dough out until it is close to the size of you 16 inch pizza pan. With a basting brush, grease the Pizza pan with olive oil, put the dough on top and flatten the dough until it fits the pan. Next, brush the edges of the dough liberally with olive oil or butter (the outer 11/2inches or so) then lightly bush the entire dough and place in the 400 degree oven, on the lowest rack, for 7 minutes. While your dough is baking, begin browning the Italian sausage in a pan. When the sausage is about 3/4 done drain off fat and add the mushrooms, cook together until sausage is done. After seven minutes, remove the dough and spoon on your sauce from the center out. Add your two cups of Mozzarella and sausage & mushrooms as well as the black olives. Brush outer crust with butter and bake pizza an additional 7-10 minutes at 450 degrees on lowest rack, or until the crust is brown and the cheese is bubbly.

The toppings are merely suggestions, add the ones you like best! 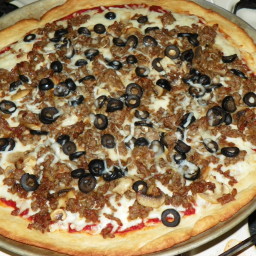