Try this Macarons shell recipe, or contribute your own.

2. Bring the water and sugar to boil at 118 ºC. When the syrup reaches 115ºC, simultaneously start whisking the second portion of liquefied egg whites to soft peaks. When the sugar reaches 118ºC, pour it over the egg whites. Whisk and allow the meringue to cool down to 50 ºC, then fold it into the almond-icing sugar mixture. Spoon the batter into a piping bag fitted with a plain nozzle.

3. Pipe macarons. Leave the shells to stand for at least 30 minutes until they form a skin.

4. Preheat the fan oven to 180 ºC then put the trays in the oven. Bake for 12 minutes quickly opening and shutting the oven door twice during cooking time. Out of the oven, leave the shells to cool down for about 20 minutes before taking them off the silicon mat. 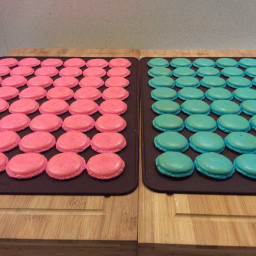