Preheat the oven to 350 degrees F.

In a medium saute pan over medium heat, render the pancetta.

Cook until browned and then remove it from the pan.

Discard some of the fat, but leave enough to cook the onions and garlic in.

Cook until the sausage browns.

Add the fennel and cook until golden.

Add back in the pancetta and pour in the wine.

Bring to a simmer.

Add the butter and stir until melted.

In a large bowl, add the stuffing mix, chicken stock, and the mixture in the saute pan.

Toss to coat evenly and then add the egg.

Add the mixture to a buttered 9x13 baking dish.

Cover with foil and cook for 25 minutes.

Remove the foil and cook for a few more minutes until golden brown. 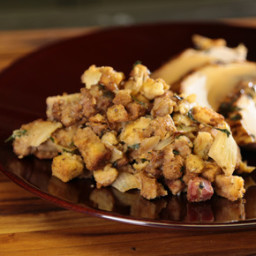