FOR A CLASSIC MOUSSE

Follow the basic recipe omitting the cream and chocolate chips. This will give you a classic simple chocolate mousse, which you can also flavour with a little liqueur or coffee, or dress up as you will.

Needs to be kept in the fridge overnight

Break the chocolate into pieces and gently melt it in a large bowl set over a pan containing a little simmering water. Allow to cool to room temperature.

Separate the eggs. In another large bowl, whisk the egg whites until stiff using an electric whisk. Stir the egg yolks into the chocolate, then stir 2 tbsp of the whisked whites into the chocolate mixture to loosen it, then fold in the remainder of the whites in two goes, as lightly as possible.

3 Transfer the mousse to a serving bowl, smoothing the surface.

Whip the cream until it forms soft, loose peaks. Spoon this over the top of the mousse, then scatter over 50g of the chocolate chips.

Cut the cream and chocolate chips into the mousse using a spoon, rotating the bowl as you do so, until the top is marbled. Tidy the bowl using kitchen paper, then scatter over the remaining chocolate chips, cover and chill for several hours or overnight until set. 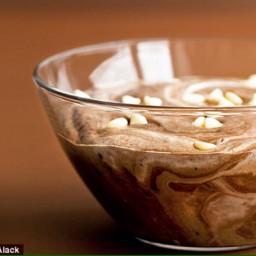