Ever find yourself at a crossroads between sweet potato pie and cinnamon rolls--it’s a tough call!

Thankfully this delectable sweet potato pie with a cinnamon roll crust will come to the rescue at your Thanksgiving table. One of my favorite things about sweet potato pie is its got a mild flavor. It’s less sweet than pumpkin pie, which is great for its sugary counterparts like marshmallows and cinnamon rolls. But like pumpkin pie, it has that wonderfully smooth texture that balances oh so well with a flaky, tender pie crust. Plus, it’s super easy to make and only requires simple ingredients.

This pie is absolutely beautiful. The broiler makes the marshmallows perfectly browned, toasty and s’more-worthy. In addition, when made in a glass pie dish, the crust is a show stopper. Basically, this pie is sure to impress even the most picky family members!

On a lightly floured surface, roll out the pie crust to form a large circle. Brush with butter and sprinkle with cinnamon. Roll dough into a tight pinwheel. Cut into 1/2 inch mini cinnamon rolls.

Press cinnamon rolls into the bottom and sides of a glass pie dish. Make sure the crust completely covers the entire dish. Brush crust with the egg wash mixture.

Using a stand mixer or a handheld mixer, beat together the potato, eggs, cream, half and half, vanilla bean seeds ONLY, vanilla extract, cinnamon, and salt until fully incorporated and smooth.

Pour sweet potato mixture in crust. Bake in preheated oven for 40 – 50 minutes, or until the pie is set and a toothpick inserted into the middle comes out clean.

Remove pie from oven. Put oven on broil setting. Place halved marshmallows on top of pie. Broil for just a few minutes and be sure to diligently keep and eye on the pie to avoid burning.

Cool on a cooling rack. Slice and serve.

You can also sub in Marshmallow Fluff instead of using marshmallows, if desired. 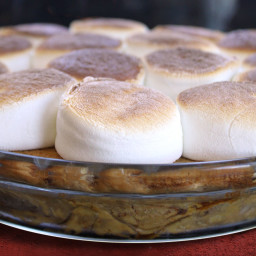 MauraSpeckt
Absolutely stunning and SUPER easy to make! This is elegant enough for a holiday party and quick enough for a weeknight. Perfect balance of sweetness and spices, the kids and hubby were wild over it. Thanksgiving, here we come! A+
8y
Reply
Reply