Ma was an excellent cook and had no "recipes" for most of her delicious home cooked dishes. This one was in one of the old church cookbooks that she gave us one year for Christmas and it's very good.

Stir until the dry ingredients are mixed well and then add:

Add 2 cups of milk and cook over medium heat stirring constantly until you get a thick, pudding-like consistancy. Remove from heat and stir in 2 tablespoons of butter, 1/4 teaspoon of vanilla and 2 ounces of coconut. Allow this mixture to cool while you are browning the pie crust.

Spray a pie dish with non-stick cooking spray and arrange the pie crust in the dish and poke holes in the crust evenly over the bottom and sides with a fork. Bake the crust until golden brown and remove it from the oven and allow it to cool completely.

Beat egg whites until they form stiff peaks while slowly adding 1/2 cup of sugar, 1/4 teaspoon of vanilla and a pinch of salt.

After the filling and crust are cool, pour the coconut filling into the pie crust and top with the merangue, spreading it over the entire surface of the filling. Sprinkle about a tablespoon of coconut over the merangue and bake at 350 until the peaks of the merangue are golden brown. Cool completely before serving. 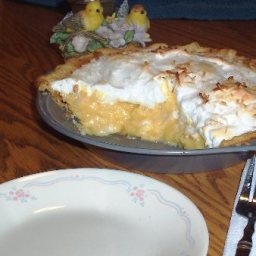