There are different styles of tamales throughout Latin America, but their essential components?masa, a filling, and a wrapper?are the same. Yields 24 to 30 medium tamales

Using a stand mixer fitted with the paddle attachment (or a hand mixer), whip the lard, butter, or shortening on medium-high speed until fluffy, 1 to 2 minutes. Add 1 tsp. salt and continue beating while adding the masa in golf-ball-size pieces, waiting a few seconds between each addition. When about half of the masa is mixed in, start alternating the masa with the pork broth until all of the masa is used, along with about 2 cups of the broth. Add 1/4 cup of the chile sauce and whip until light and fluffy, adding more broth if the mixture seems too dry.

To test if the masa is ready, take a small piece (about 1/2 tsp.) and drop it in a cup of cold water. It should easily float. If not, simply whip the masa for a few more minutes and test again. Often, adding a bit more of the pork broth or cool water during this second mixing will help; don?t add too much liquid, however, or you?ll end up with overly soft masa and shapeless tamales.

Soak the corn husks in very hot water for 30 to 45 minutes, or overnight in cool water with a plate or bowl set on top of the husks to keep them submerged. You?ll have enough husks to make the tamales, plus extra to line the steamer and make up for any broken husks.

In a medium bowl, mix 2 cups of the chile sauce with the shredded meat and season to taste with salt.

Wipe a soaked husk dry and put it smooth side up on a work surface. If necessary, trim the bottom with scissors so the husk can lie mostly flat. Put about 1/3 cup masa in the center of the widest portion of the husk. With a spoon or spatula, spread it evenly over one-half to two-thirds of the husk leaving a 1/2-inch border at each edge.

Put 2 to 3 Tbs. of the pork filling in the center of the masa about ? inch from the wide end.

Fold the corn husk in half lengthwise so the edges meet. Fold the seam back so it?s in the center of the tamale. Fold the tail of the wrapper to cover the seam (at least half the length of the tamale). Flip seam side down onto a tray or rimmed baking sheet. Repeat with the remaining ingredients.

The tamales can be steamed as they are, or tied to make them more secure or to dress them up. To make ties, rip long, thin strips off one or two corn husks. Then place a strip of corn husk under the tamale, wrap it around the middle (making sure that you have some of the tail underneath) and tie securely.

Fill a deep 8-quart pot with a pasta insert with enough water to reach just below the insert. Without the insert in place, cover and bring to a boil over high heat. Have ready a kettle or pot of almost boiling water to add if the water gets low. Arrange the tamales upright (open end up) in the insert, leaving room for the steam to circulate. Fit the the pot over the boiling water. Use he extra husks to cover the tamales (this helps concentrate the heat). Cover the pot with a lid. Steam for 1 to 1-1/2 hours, adjusting the heat as needed to keep the water just boiling. Check the water level frequently and add more as needed to keep the pot from going dry.

To test for doneness, quickly remove a tamale and replace the lid on the pot to continue the cooking. Put the tamale on the counter for a few minutes and then carefully unwrap it. If ready, the masa should be set and will pull away from the wrapper easily.

Serve the tamales in their wrappers with extra sauce passed on the side, and have diners unwrap them just before eating. Once unwrapped, they cool quickly. 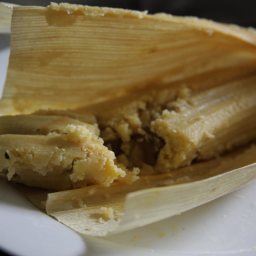 promfh
Given this recipe for basic Masa you can make alost any kind of tamales you desire.
12y
Reply
Reply

mraguirre22
[I made edits to this recipe.]
12y
Reply
Reply