Try this Mason Jar Burrito Bowl Salad recipe, or contribute your own.

FOR THE QUINOA: Add the quinoa, water, and salt to a medium sized pot. Bring to a boil over medium heat. When it has reached a boil, cover and cook for 20-25 minutes, or until the quinoa is soft and fluffy.

Set the quinoa aside to cool. When it has cooled, add the lime juice, lime zest, and 1/4 cup chopped cilantro to the rice and stir to evenly distribute the ingredients. Taste, and add more lime or cilantro as needed.

FOR THE CHICKEN: Dry off thoroughly with paper towels. Pound the breasts between plastic wrap until evenly 1/2 inch thick. Season both sides of each breast using the 2 teaspoons of salt. In a large skillet, heat 1 tablespoon coconut oil or ghee over medium-high heat until the oil is very hot. Add the chicken breasts to the hot skillet, and cook for about 4 minutes on each side. Both sides should have a pretty brown sear to them. When the chicken breasts are cooked all the way through, remove them to a cutting board to cool. Once they've cooled, cut the chicken into small chunks, about 1/2 square inch each.

FOR THE BACON: If you're going to add bacon to your salad, cook 2 slices of bacon as you normally would, until it is crispy enough to crumble. Reserve 1 tablespoon of bacon fat for the sweet potatoes.

FOR THE SWEET POTATOES: Cut up the sweet potato into tiny chunks, about 1/2 square inch each. Heat 1 tablespoon of bacon fat (or, if you didn't use bacon, coconut oil) in your large skillet over medium heat. When the oil is hot, add the sweet potato cubes. Sear the potatoes on all sides, stirring every 3-5 minutes. When the potatoes have all browned on the outside, turn the heat down to medium-low, cover the skillet with a lid, and cook the sweet potatoes until they can be easily pierced with a fork. Set aside to cool.

ASSEMBLE THE SALADS: When all ingredients have cooled, you can begin to assemble your burrito bowl salads. Add 1 tablespoon of Greek yogurt to the bottom of each mason jar. Top with about 2 tablespoons of sweet potato cubes. On top of the sweet potatoes, add 3-4 tablespoons of the cilantro lime quinoa. Layer 1-2 tablespoons of cheese over the quinoa, a little less than half a piece of bacon over the cheese, and a layer of chicken over the bacon. (To make this vegetarian, substitute 1 can of rinsed beans for the chicken and bacon and add a layer of beans here.) Fill the remaining space in the mason jar with lettuce, and sprinkle some additional chopped cilantro on top before screwing on the lid. 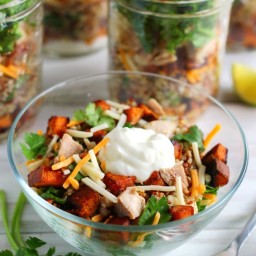