Not your usual lasagne as it has no cheese sauce. Its a lighter lasagne but does not skimp on the deliciousness. This reheats really well as there is no cheese sauce to go all gloopy.

Start with the tomato sauce. In a heavy pan heat a few tablespoons of olive oil and add chopped onions, garlic and carrot. Cook on a medium heat for several minutes, stirring now and then until the mixture is soft. You don't need to colour the onions too much.

Stir in the tomato paste and Paprika and cook for a couple of minutes, not forgetting to keep stirring to prevent sticking. Add the wine or stock and continue cooking until the liquid has reduced by around two thirds.

Add the chopped tomatoes, stir well and bring up to a simmer. Simmer uncovered for around 20 minutes.

Allow to cool a little and blitz with a hand blender. You could use a normal blender, however the hand blender allows you to get the consistency to your own personal preference. Season with salt and pepper and set aside.

Whilst the tomato sauce is simmering you can prepare the vegetables. Either fry them in olive oil until they are cooked through and have a nice toasted colour or for a healthier option cook them in a George Forman style grilling machine. You will still need a bit of oil, but not as much. If using this method, the peppers can be finished off in a frying pan with a little oil after you have cooked the mushrooms.

Now you have the Sauce and Vegetables it is now time to put the lasagne together.

I use a 30cm cast iron frying pan to make the lasagne.

First switch on the oven to about 180 centigrade or about 175 if using a fan oven.

Evenly spread about a tablespoon of oil on the bottom of the pan.

Layer the Aubergine in a single layer. There should be enough to cover the base.

Cover with a single layer of lasagne, followed by another thin layer of sauce.

Then the courgette in a single layer followed by sauce, lasagne, sauce then finally mushrooms and pepper.

Layer of sauce, then lasagne, sauce then sprinkle grated cheddar and Parmesan.

Bake in the oven for around 30-40 minutes. After this time put the lasagne under a grill until golden.

The key to this is lots of thin layers. To add your own twist change the vegetables, the order etc.
You should not use all the sauce. There should be plenty left over to make make something else. 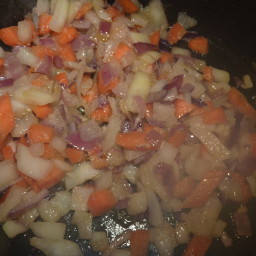 Soften the onions, garlic and carrots 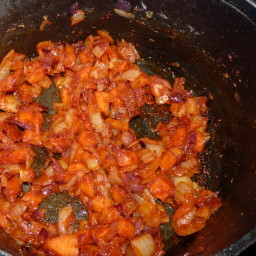 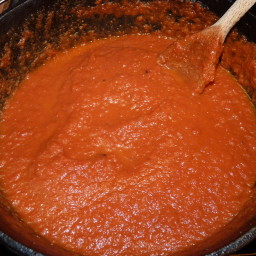 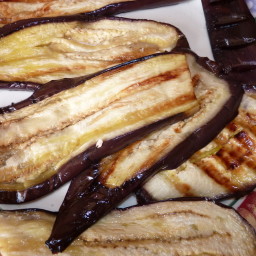 Aubergine cooked and waiting for the next step 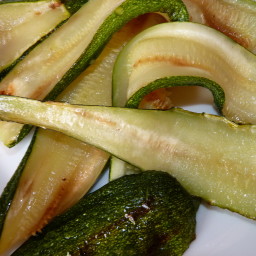 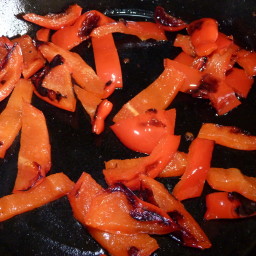 Cook these longer so they soften nicely