1. Fresh tortillas will not work well for this recipe. Cut tortillas into wedges. Spread a single layer on a baking sheet and allow to air-dry or dry in a 200 F oven for approximately 20 minutes.

2. Lightly salt the tortilla wedges and fry in hot oil (400 F) until hardened but not brown and crispy. Drain on paper towels and set aside.

4. Remove the chicken from the pot. Discard any skin or bones and shred the meat. Strain the broth into a separate container.

5. In the soup pot, heat the 1 tablespoon oil and saute the chopped onion and chiles over medium heat. Cook until the onion is soft. Add the tomatoes and cook until soft.

6. Return the broth to the soup pot, add the 1 teaspoon salt, and bring to a boil. Reduce heat and add the juice of 3 or 4 of the limes, plus a squeezed lime half. Simmer 20 minutes.

7. Remove the lime half, add the shredded chicken, and simmer 10 minutes. Stir in the cilantro. Reheat the tortilla wedges in a 350 F oven for 10 minutes.

8. Cut the avocados in half, seed, peel, and cut into slices. Cut the remaining limes into wedges.

9. Ladle the soup into serving bowls and drop hot tortilla wedges into each bowl. Serve the avocado slices and lime wedges separately.

* Note: In the Yucatan, where this recipe originates, it is made from Yucatecan "limas agrias", which translates as sour lemons. Some Mexican recipes suggest using one lime and one lemon to approximate the taste; another suggests adding grapefruit rind. It's great using persian limes although "mexican" or key limes are more accurate.

This is the soup our family has traditionally served, with tamales, on Christmas eve.

We make this every year on Christmas eve. Along with tamales it's part of the Mexican Christmas tradition that we have adopted. 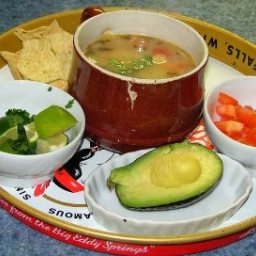 Moskial
Made this recipe a few times exactly as described and it is amazing! I will be returning to this recipe again in the near future.
8y
Reply
Reply

Moskiai
Easy to make and dishes up beautifully. This dish has definitely been added to my favorites list!
12y
Reply
Reply

Lejanele
This was different but very good, even my four year old loved it!
12y
Reply
Reply

promfh
We make this every year on Christmas eve. Along with tamales it's part of the Mexican Christmas tradition that we have adopted. [I posted this recipe.]
16y
Reply
Reply