Tortas are great party food that are extremely easy to prepare and serve. This version is slightly spicy but full of flavor. Everyone will love it!

• In a medium Dutch oven, heat the oil. Season the pork with salt and pepper and cook over high heat until browned on both sides, about 2 minutes per side. Add the garlic and oregano and cook, stirring frequently, until fragrant, about 2 minutes. Add the chicken broth and bring to a boil. Add the Mexico City sauce, cover and simmer over low heat until the pork is cooked through, about 25 minutes.

• Transfer the pork to a plate and shred with two forks. Meanwhile, simmer the sauce over moderate heat until thickened, about 10 minutes. Stir the shredded pork into the sauce and season with salt and pepper.

• Meanwhile, cut baguette into 4 equal lengths. Split each piece in half horizontally. Pull out most of the soft bread from the center so you’re left with mostly crust. Arrange the pulled pork over the bottom of each roll. Scoop about 1 tablespoon of refried beans over the top half of the roll and spread evenly. Divide the avocado, tomatoes and onions evenly among the sandwiches. Cut each in half and serve. Provecho!

• MAKE AHEAD The pork can be refrigerated overnight. Reheat gently. 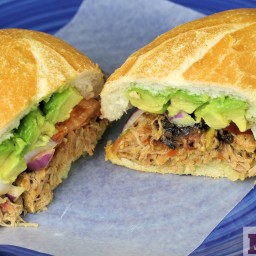