My take on one of those recipe videos like you see on Facebook. I watched only once, and came up with this.

Dice the chicken, and lay it out on a plate or cutting board. Season with the salt and pepper.

Put the diced bacon into a cold Dutch oven, and cook over medium heat until almost crispy. Remove bacon from Dutch oven to a small bowl, and remove some of the fat with a spoon.

Cook the chicken in the remaining bacon fat until done. Remove chicken from Dutch oven, and put it with the bacon.

Sauté the onion and peppers until they soften. Add the chicken and bacon back in.

Add the corn and stir.

Add the ground dried peppers, chili powder, cilantro, and flour, and stir until everything melds together.

Add the chicken broth and water. Bring to a boil. Reduce heat and let simmer for 15-20 minutes.

Turn off the heat, add the half and half, and stir.

You could serve it with sour cream or Mexican cheese, or eat it as is.

Use fresh chopped cilantro instead of dried, but then add it with the half and half, instead of to the spice mixture. 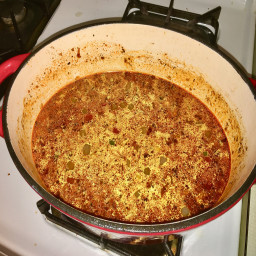