Preheat the oven to 180 °C and grease a loose bottom cake tin.

Crust, In a blender blend the biscuits to fine crumbs, add the butter and blend until the crumbs are well coated. Line the tin with the biscuit crumble and bake for 5 minutes.

Filling, In a deep saucepan, heat the milk, half the castor sugar, vanilla and cinnamon stick until warm but not boiling. Sift the dry ingredients into a large mixing bowl.

In another mixing bowl whisk the egg yolks, water and the remaining castor sugar until pale and light. Add the dry ingredients to the egg mixture, add the milk mixture to the egg and flour mixture and whisk until smooth.

Return the mixture to the pan on medium heat. Add the butter and stir until thick. Remove the cinnamon stick then whisk the egg whites until soft peaks form and fold into the milk mixture.

Fold the custard into the crust and bake for 30 minutes or until cooked in the centre. Dust with cinnamon before serving. 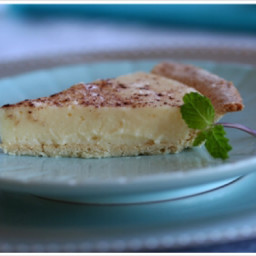