My mom would make split pea soup whenever she served ham which was at Easter and Christmas. Her soup was awesome. She never had a formal recipe; at one point I wrote down the ingredients. I did my best to recreate it and I think I came pretty close!

Rinse the split peas and place in a bowl, cover with cold water and let sit overnight or at least 1 hour minimum

In a large Soup Pot, cover the ham bone or the ham hocks with water. Bring to a simmer and let simmer until the meat falls off the bone (several hours)

Allow the broth to cool; the fat will form on top. Peel the fat off or pour through a gravy pourer to save the stock and remove the bones.

Place 8 cups of broth into a large pot, add 4 cups of water, heat up.

Remove the peas from the bowl and rinse, add peas to the broth.

Using a food processor, roughly chop the onion, carrot and celery. Add to the broth.

If using the ham hock, chop the ham into big chunks and run the meat through the food processor to roughly process and add to the pot.

If using the ham bone, clean off the ham that has fallen from bone and add into the broth

laddle into bowls and serve with crusty bread

My mom always used a left over ham bone. I usually do not have a ham bone available and so I use a combination of ham hocks and ham as a substitute. The 3/4 lb of ham in this recipe will produce a soup with lots of ham; if you prefer less, you can back off. Also, you can serve as chunky or as more of a puree. A t the end of the recipe you can use a hand blender to make into a more creamy soup. Both are good! 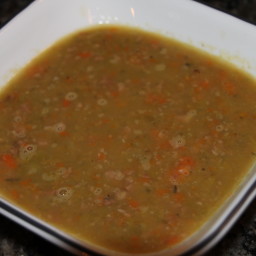 In this version, I pureed the soup with a hand immersion blender. YUM!

lisacrooke
This soup is so smoky and flavorful
9y
Reply
Reply