can also barbecue the peppers and aubergines for the ratatouille, which

lends it a marvellously �moky taste. However, ifyou don't have a barbecue,

you can do all the cooking indoors and the dish will still taste good.

something full offlavour rather than everyone's weak and watery

nightmare vegetarian dish! Although this ratatouille is made with grilled

vegetables you can also serve the monkfish with a more conventional

ratatouille.Try following the recipe in the poem called 'Ratatouille' on

Remove the skin from the monkfish and cut off most of the membrane (see p.1 5), otherwise the tail will curl up rather unattractively while it cooks. Make 10 small incisions all over it with the point of a small knife.Take 10 slices of the garlic and turn them over in the ground fennel to coat. Slide them down the blade of the knife into the monkfish.

For the ratatouille, brush the peppers with some of the oil and grill on a barbecue, turning them as they blacken and blister Put the sliced aubergines in a shallow dish with 4 tablespoons of the olive oil, sprinkle with salt and turn them over in the oil until well coated. Cook on the barbecue for a few minutes on both sides until soft. If you don''''t have a barbecue, you can cook the vegetables on a cast-iron ribbed pan or cook the peppers under a domestic grill and fry the aubergines in the same amount of oil.

Heat half the remaining oil in a heavy-based flameproof casserole dish, add the onions and cook very gently for about 30 minutes, stirring occasionally. Add the remaining garlic and the courgettes, season with salt and pepper and cook for another 5 minutes.

Pour the rest of the oil into a frying pan and fry the tomatoes over a high heat until just beginning to fall apart. Add the tomatoes and all the oil to the casserole.

Remove the blistered skin from the peppers, cut them in half and remove the seeds, taking care not to pour away the delicious juice that will have accumulated inside. Pour this into the casserole. Slice the peppers and add them, too, with the aubergines. Stir in more salt and pepper and the thyme and bay leaves, then cook the ratatouille, uncovered, over a very gentle heat for about I hour, by which time the excess moisture in the vegetables will have evaporated and the vegetables should shine with oil.

Now put it on top of the ratatouille, cover with a lid and simmer for the last 20 minutes of the ratatouille cooking time. Check that the monkfish is cooked by making a small incision in the thickest part right into the centre.The fillet should be white right through. If it still looks a bit translucent in the middle, give it another 5 minutes.

To serve, lift out the monkfish and cut it into slices. Spoon the ratatouille on to I warmed plates, place the sliced monkfish on top and serve with a green salad and a bottle of ice-cold Bandol ros? wine.

I head of garlic, cloves peeled and thinly sliced 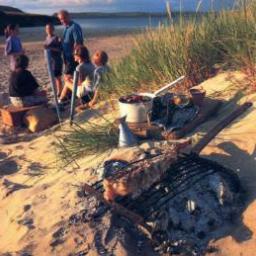 RevKenelm
I had a heck of a time locating monkfish in CA. but when I found it I liked it a great deal, it made a great ratatouille, I just love fish, fowl, or cheese in ratatouille, thank you.
6y
Reply
Reply