A Vegetarian Lasagna that is equal to, if not better, than any meat lasagna I've ever had (and I'm a serious carnivore, lol.) Using Spinach Lasagna, and preparing everything from scratch, this dish comes together to form one of the greatest culinary experiences you will ever have. Prep the night before to really get the most of this meal.

This recipe is done in a few parts, so I've outlined them in the order they're to be prepped for easy following.

Pre-heat oven to 500 degrees Fahrenheit. Quickly rinse your three red peppers and pat dry. Place them on a non-stick baking pan and place in oven for 45 to 50 minutes. Shake the pan every seven minutes or so to move the peppers around. Finished when peppers have nicely burnt skin and have collapsed in on themselves.

Remove from oven and place in large bowl, covered with cling wrap. Let cool for about 15 minutes, then remove from bowl and de-stem, de-seed, and de-skin. The stems should pull right out easily, and if you're lucky most of the seeds will come with them. Tear each pepper into four or five sections, and remove the skins. Make sure all the skins and seeds are removed.

While the peppers are cooling in the covered bowl from the beginning of that last step, prepare their marinade. In a large zip-lockable container, combine 5 tablespoons of olive oil with 2 tablespoons of red wine vinegar, add 3 peeled and lightly crushed cloves of garlic, along with salt and pepper to season.

Once the peppers are ready, lay them in this marinade, and refrigerate for at least an hour, and up to 24 hours. For best results, prepare this the night before and let marinade for about 16 hours or so.

Rehydrate your dried mushrooms according to the instructions on their packaging. This takes approximately 15 minutes. While hydrating, chop your cremini mushrooms, and blend your can of plum tomatoes in a blender or food processor. The idea is to lightly chop the tomatoes quickly, not to liquify them. So blend quickly and on a low chop setting. Also peel 3 cloves of garlic and lightly crush them.

Using a large saute pan or large pot, heat 3 tablespoons of olive oil over medium heat. Once heated, add your 3 cloves of garlic and let brown slightly (about two minutes). Then add your chopped cremini mushrooms and, after draining and preserving their water, add the porcini mushrooms. Cook for another two minutes and then add the blended tomatoes. Simmer over low heat for about a half hour or until the sauce takes on a thick consistency. You just don't want a watery sauce essentially, so you have to boil off the juices for a bit. After about fifteen minutes of simmering, add your 1/2 cup of porcini mushroom water, and two tablespoons of red wine vinegar. Near the end of your simmer, be sure to season with salt and pepper to taste. Take a minute to taste the sauce as well at this point. It should be nicely seasoned, and have an earthy mushroom flavour from the porcini mushrooms. Don't worry if it seems to taste a little too bold, the flavours mellow as they combine with the rest of the ingredients.

At this point the sauce can be placed in a large bowl and refrigerated for up to 24 hours. I like to make this portion the day before as well, as it makes the next evenings lasagna come together much quicker.

Take a minute to grate your cheese to have it ready, and then move onto the pasta itself. I never know how much pasta I'll need, but use a 9" x 13" baking dish, and try to measure out how much you'll need by laying it in the dish. You'll need four layers of noodles, so maybe 16 dried noodles, or just custom cut your fresh pasta. Cook the noodles in a large pot of boiling salted water a few at a time to make it easier to pull them out and not overcook them. Cook fresh pasta for just under a minute, and dried pasta for about three minutes. Remove promptly and let dry on paper towels off to the side.

Turns out ricotta cheese lasagna is more of a North American stlye, while a simple Bechemal sauce is more common in Europe. It adds a fantastic characteristic to the lasagna and is fairly simple to make. Using a large frying pan, heat it over medium low heat, and then add three tablespoons of butter. Melt over medium low heat for about five minutes or so. The butter will start to foam, and then suddenly subside. This is when it's ready. Add your flour at this point and stir with a whisk constantly for about four minutes. You'll notice the mixture start to brown, which is what gives it flavour. Brown longer for a more bold flavour. Add your milk slowly, half a cup at a time, continuing to stir moderately as the mixture thickens. Once all the milk is added, and the mixture is relatively thick (not too thick), you're done. Remove from heat.

Bring out your sauce and marinated peppers, and using 1 tablespoon of butter, grease the baking dish using your fingers. Spread the butter all around, and use a bit more if you have to.

Lay your first layer of spinach lasagna noodles on the bottom of the baking dish - be sure not to overlap, and trim any excess noodles. Add a ladle full of the mushroom sauce, a smaller amount of the bechemal sauce, and a handful of the parmesan cheese. Add another layer of pasta and repeat. Add your third layer of pasta and repeat, only using a little bit less of each sauce, and now adding your strips of marinated red pepper (obviously just use the peppers and do not add any of the marinade itself). Add your final layer, with whatever amount of sauces are left, and combine some mozzarella with your remaining parmesan cheese to top it off.

Bake in a 500 degree fahrenheit oven for about twenty minutes, and finish by broiling the top of the cheese for a couple of minutes until nice and browned. Remove from oven, let cool a bit before cutting, and voila, one of the best lasagna's you will EVER consume! Enjoy! 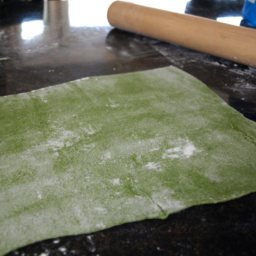 GreggWeisbrod
Prepare the mushroom sauce and the red peppers the night before to make a more relaxed experience, and marinate the peppers fully. The porcini mushroom water really adds alot of flavour to the mushroom sauce, and you can certainly use more or less to your liking. As I said, once combined with the Bechemal sauce and the cheese, it really blends the flavours nicely. [I posted this recipe.]
11y
Reply
Reply