This recipe is perfect for the summer months when grilling is in high gear(at least at our house anyway). I chose to stuff the bread with some grilled flank steak topped with some sour cream/cilantro sauce...Alternately, the bread is good as a base for all sorts of dips(hummus,baba ganoush...etc.).

Combine the flours ,yeast/salt and sugar in a mixer bowl.Set aside. Warm up milk to about 110 deg. Add milk to the flour mixture.Mix in a stand mixer( I used my Kitchen Aid) on medium speed for 5 minutes, or knead by hand until the dough is smooth and elastic.Cover with plastic and allow to rest for two hours. After the dough has rested, turn it out onto a floured surface. Divide the dough onto 12 equal pieces and round them into balls. Cover with a towel and allow to rest for 30 minutes.While the dough rests, heat your oven to 500 F and place a pizza stone on the bottom rack of the oven. I guess you can also use a cast iron skillet to do this. After it has rested for 30 minutes, roll out the dough until it is about 6? to 7? wide. It shouldn't be too thick, more on the thinner side.Moisten the dough with a bit of water, either with a dipped pastry brush or by running your hands through running water and then moistening the dough with your wet hands.Lay the dough onto the hot pizza stone. Close the oven and bake for 2 1/2 to 3 minutes, or until puffed and beginning to get brown spots. Don't overcook it or it will get brittle on you. Brush with melted butter(or ghee...clarified butter) and cover. I chose not to brush it with butter since I was going to freeze most of them. I did however, place them (stacked) in a plastic bag when still warm to sort of steam and make them softer. I also, took them out later(frozen)and wrapped them in foil..to sort of steam them. I placed them

on the grill for a few minutes while my flank steak was cooking. This way I had nice warm bread ready to be stuffed with the meat and sour cream/cilantro sauce(of course you can use yoghurt). 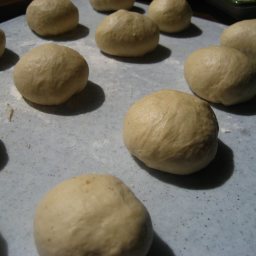 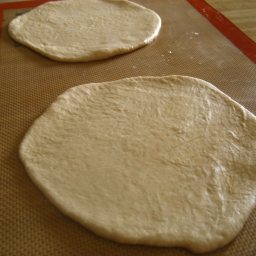 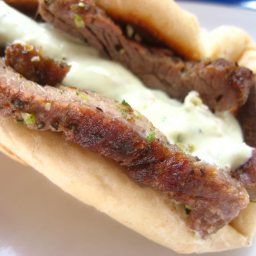 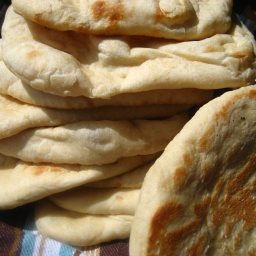 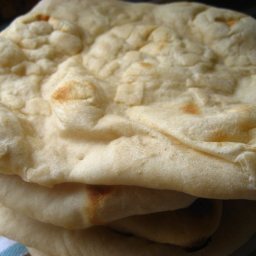 lollyh1101
The bread itself was fine, good texture and taste, but NOT Naan Bread (I wanted like what you get at an indian restuarant) This was more like a pitta bread!
10y
Reply
Reply

pineapplebutter
I made this tonight and liked it as a flat bread, however, it wasn't naan for me. It just didn't have the taste I was looking for, but it's still a good bread recipe to have on hand. I'm going to look around some more for a recipe closer to that used in Indian restaurants. Thanks for posting.
11y
Reply
Reply