This is part of my series on making all my mother's foods from when I was a child. My nephew started calling this "Nana's Famous Fried Chicken" when he was little, but in my house growing up, this was just what fried chicken was.

The "pancakes" (photo, top left) are just basically fritters my mom made to use up the extra eggs and breadcrumbs, but they've become an important part of the fried-chicken meal to my family, so I always make them. You can skip them if you want.

More on the Mom Food project is at http://serenecooking.livejournal.com/tag/mom+food

Mix the eggs, 1 T oil, and 1 T water in a shallow dish/bowl big enough to dip a piece of chicken into. In a second shallow dish, combine the breadcrumbs, cheese, garlic, salt, pepper, and dried basil.

If you're making pancakes, mix the bread crumbs and add 1 to 1.5 cups of water to the mixture to make a thick batter, then let sit covered in the fridge until the chicken is done frying.

Preheat oven to 350F. Fill a heavy frying pan (I use cast iron. Mom often used whatever she had handy, and for a while, she used an electric skillet) with enough oil to go up about halfway on the chicken pieces. I started with about a pint in my 10-inch iron skillet. Heat on medium-high until a piece of breading sizzles when it hits the oil.

Fry a few pieces at a time (as many as will fit in your skillet -- I did 3 at a time), turning once, until both sides are browned as brown as you like it. Place the fried pieces on a cookie sheet in the oven. Mom says to tell you it's not done yet. Keep frying and adding the new pieces to the oven to finish cooking. By the time you're done, the pieces you put in first will be perfect.

To make the pancakes, just fry 1/4 cup or so portions of the batter, turning once, until they're as brown as the chicken or a little browner. Don't worry if the oil foams up so you can't see the pancakes -- it'll die down in time for you to flip them.

Oil: I used more than a pint but less than a quart for this amount of chicken.

Chicken: Mom does 10 pounds of leg quarters. I did 5.25 pounds of thighs. When I was little, she would fry up a whole cut-up chicken or two, but most of us only liked the dark meat, so she gradually took to just doing the legs.

For the nutritional analysis for this recipe, I entered 1 cup of the frying oil, because most of the oil is used to fry but stays in the pan. 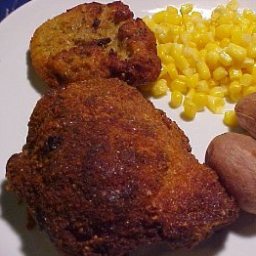 MangoTangSnow
It is sooooo good!!! We made it with homemade bread crumbs (traditional Filipino bread: pan de sal). The sweetness of the bread and the chicken and Parmesan is just soooo good!!
8y
Reply
Reply

serenevannoy
I'm still learning how to use this site. The notes are important, and I didn't know they wouldn't show up with the recipe. I'm going to have to post another revision. Sorry. [I made edits to this recipe.]
12y
Reply
Reply