Try this NAPOLEON A MAMAN recipe, or contribute your own.

2-In a small saucepan, combine the vanilla pudding and milk. Cook over medium heat, stirring frequently with a whisk, until it reaches a boil.Cool a little and pour the pudding over the graham crackers and refrigerate until firm.

3-In a mixing bowl with beater attachments, beat the whipping cream. Spread the whipped cream evenly over the pudding.

4-Make another layer of graham crackers. Spread frosting over the top.

5-Place the chocolate in a small microwaveable bowl. Microwave 30 seconds at a time, checking and stirring until melted. Drizzle in thin lines over the length of the frosting. Drag a knife lightly across the chocolate to create swirled lines.

6-Chill for several hours in the refrigerator before serving.

2-Meanwhile, whisk cornstarch and remaining ¼ cup milk in large bowl until no lumps remain, about 15 seconds. Whisk in egg yolks until fully incorporated, about 30 seconds.

4-Return milk-yolk mixture to saucepan. Return saucepan to medium heat and cook, whisking constantly, until pudding is thickened and registers 180 degrees in several places, about 1 minute. Off heat, whisk in butter and vanilla. Strain through fine-mesh strainer set over clean bowl. 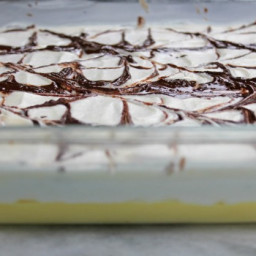