Savory and sweet, with a nice smoky flavor. Perfect accompaniment to grilled food.

Bring six cups of water to a rolling boil. Add the beans, cover, bring back to boiling for two minutes. To minimize foam-over, add a couple of tablespoons of cooking oil after adding the beans.

Turn off the heat, and let the beans stand for an hour. Then, heat them back up until they just start to boil. Lower the heat, and simmer, covered until tender (that means they aren't at all crunchy when you take a test-bite). Takes at least another hour. Try not to take them too far or they'll get kind of mushy.

When the beans are done, drain and save the liquid. Add one cup of the liquid to the other ingredients in the mixing bowl and mix until the salt, molasses, sugar, and mustard are thoroughly mixed in.. Then, add the beans and gently mix. Pour all this in a casserole dish. If you're using salt pork, take the remaining half that you made cuts in, and push it into the surface of the beans (but not buried completely). Pour enough of the reserve liquid over the beans to just cover them. Keep the remaining liquid in case the finished, baked beans look a little dry.

Bake at 300 degrees F. for 6 to 8 hours. Since most ovens have start/stop timers, you can probably do this overnight. Just be sure you're awake one hour before the beans are done so you can check them to see if they seem too dry. If so, pour some of the reserve liquid evenly over the top. Use your judgment. 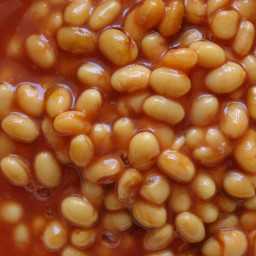 Corwin26
This is a great recipe for a side dish! The instructions are SUPER clear and the results were great tasting to me and my friends. No changes were needed at all, and chorizo was the perfect element for this dish, no mistake! TY for sharing!
9y
Reply
Reply

stevemur
My father-in-law made these for a recent picnic, and I really enjoyed them. Sweet, smoky, tangy... perfect.
11y
Reply
Reply