Line the wells of 24 cupcake pans. Place an Oreo halve in the bottom of each liner, cream side up. In a medium bowl, combine the flour, baking powder and salt; stir together with a fork to blend, set aside. In the bowl of an electric mixter, combine the butter and sugar; beat together on medium until light and fluffy-about 2 minutes. Blend in the egg whites one at a time, beating well after each addition. Blend in the vanilla extract. With the mixer on low, beat in half of the dry ingredients just until incorporated. Add the milk and beat just until combined, then mix in the remaining dry ingredients. Gently fold in the chopped Oreo's with a rubber spaturla until evenly incorporated; do not over-mix. Evenly divide the batter between the cupcakes. Bake for 18-20 minutes, rotatitng the pan halway through baking, until a toothpick inserted in the center comes out clean. Allow to cool in the pans 5-10 minutes, then trandfer to a wire rack.

Frosting: combine the cream cheese and butter in a bowl with an electric mixter, medium - high until smooth, 1 minute. Blend in the vanilla. Beat in the confectioners' sugar until incorporated and smooth, 2 minutes. Add the heavy cream to the bowl and beat on medium-low until just incorporated, then increase the speed to medium-high and whip for 4 minutes until light and fluffy.

Frost when cupcakes have cooled. Garnish with crumbs and Oreo halves. 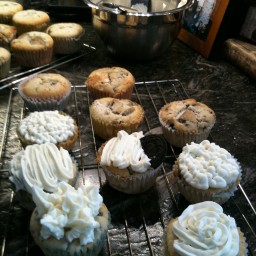